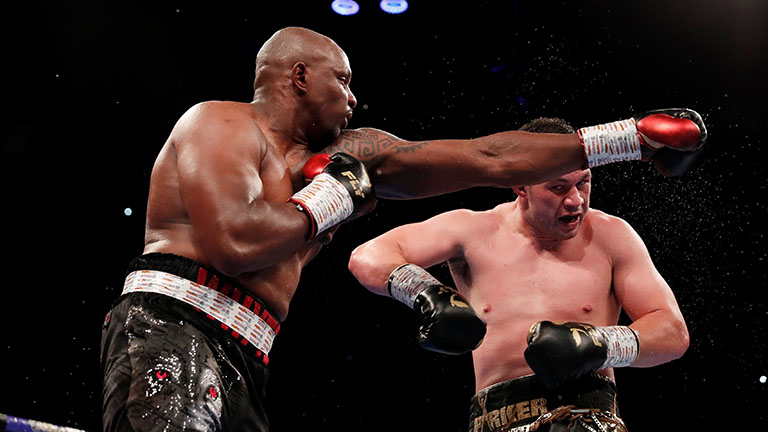 Dillian Whyte and Joseph Parker on their gruelling heavyweight clash

DILLIAN WHYTE targeted a rematch with Anthony Joshua after securing the finest victory of his career by outpointing Joseph Parker.

The 30-year-old heavyweight was awarded a unanimous decision victory at London’s 02 Arena having produced his most polished performance against a former world champion before surviving a late knockdown to reach the final bell.

He was fortunate to be awarded a knockdown with what appeared an accidental clash of heads in the second round but then heavily dropped the New Zealander, 26, in the eighth to succeed where Joshua could not.

In March’s fight with Parker, the IBF, WBA and WBO champion was taken the distance for the first time having been frustrated by his speed and movement.

A rematch with Whyte, his great rival, had long appeared likely after the extent to which they entertained when Joshua inflicted his only defeat in December 2015, and after Whyte’s latest victory it has almost become inevitable.

“I would like to fight Joshua again if he wants it,” Whyte said of the champion who next defends his titles against Russia’s Alexander Povetkin on September 22.

“I’ve still got a lot to learn so I would like to get one more [fight] in before him.

“It was a good fight. [Parker’s] slick and I knew he was going to fight for the first few rounds, then he came back in the final few rounds.

“I am annoyed I slipped at the final hurdle in the last round. I was rocked and took a few.

“We knew he was going to fight the first few rounds.

“I was rocked but I carried on fighting. I’m still learning after 24 pro fights; I’m privileged to come in and fight this guy.”

Their match-up represented as significant a risk for Whyte – already on the verge of a world title fight – as Parker, who after his first defeat by Joshua has lost twice in succession.

He will have to rebuild his reputation if he is to truly return to contention, having previously travelled to the UK to defeat Hughie Fury, and he said: “What a great opportunity to come and fight in the UK for a third time.

“We knew it would be a tough challenge, Whyte was so strong and is still progressing; we are still young.

“I say congratulations to Dillian.

“I gave it my best, the better man won, I will come back stronger.

“This shows I have a lot to work on, but I’m still young. Congratulations to my brother here.”