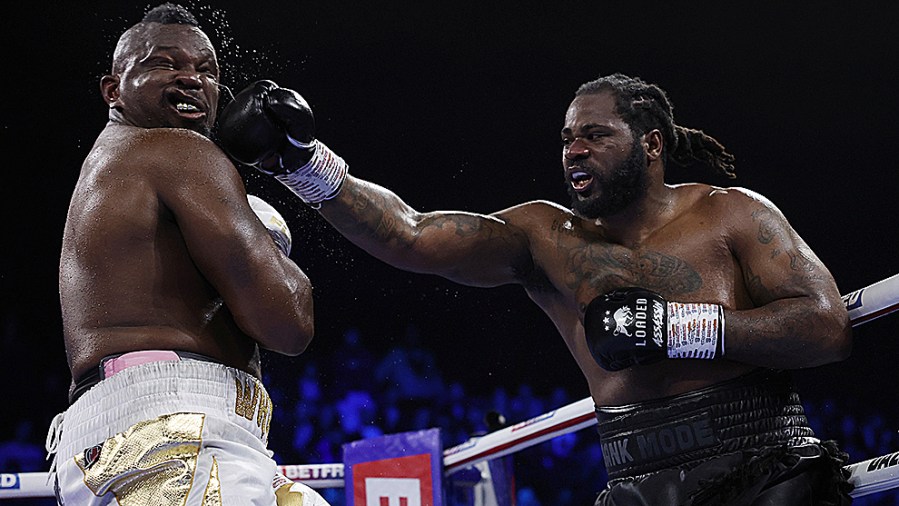 IF THIS was supposed to be the hors d’oeuvres for Joshua v Whyte II next summer, these long, arduous 12 rounds between Dillian Whyte and Jermaine Franklin did not have the requisite seasoning to really whet the appetite.

Anthony Joshua was ringside at Wembley Arena as Whyte ground out a majority decision against the previously undefeated American who screamed robbery at the verdict.

Franklin, who has been working in a housing insulation factory, might have had a point with many onlookers feeling he had done enough to secure the victory which would have changed his life. But crucially judges Juergen Langos and Grzegorz Molenda, who both had it 116-112 in favour of Whyte, did not agree. Michael Alexander had it 115-115 and that was probably the fairest reflection of this nip-and-tuck scrap.

In truth, Whyte, so often rugged and aggressive, looked flatter than usual and Franklin was not there to make up the numbers. He had fast hands, an incisive jab and, when required, an incredibly good chin. Having been knocked out three times in his career to date, against Joshua, Alexander Povetkin and most recently Tyson Fury, the question is what does Whyte genuinely have left.

It would be unfair on Franklin to suggest that a younger, fresher Whyte would have made easier work of his visitor but there were certainly signs of the ageing process in this performance. “I was fighting for my career out there,” Whyte said after.

This was his first fight back since April, when a right uppercut from Fury sent him almost to sleep at Wembley Stadium. So Whyte knew a second-successive defeat – a few hundred yards across the road at the Arena – would end his career.

“I never thought it would be an easy fight,” Whyte said. “The guy was 21-0. I knew he had quick hands and I knew he was going to be tough. He said it’s a robbery but these guys always say stuff. He can say what he wants, if that’s how he feels, then that’s how he feels.”

There was not an awful lot in the first half of the fight. Whyte was making a point of switching his attack from head to body while Franklin countered smartly with both hands. It was Whyte’s first fight with new trainer Buddy McGirt in his corner and there was a definite change in style from the “Bodysnatcher”.

There was also a clear reliance on hand defences from an old-school cross-arm guard from Whyte and he utilised it well. A lot of Franklin’s best shots were hitting gloves but the trouble for Whyte was that he rarely countered off them with any real purpose.

“I spoke to Buddy about it,” Whyte said. “I haven’t got a traditional boxing style. My style is a bit awkward and a bit weird so we’ve added the Archie Moore style, where I don’t have to go backwards.”

There was some booing in the crowd, which can’t have been more than 3,000 on the night, during the ninth but in the closing stages of the round Franklin landed his best shot of the fight, an overhand right which seemed to stun the Londoner and Franklin followed up with another flurry. Fortunately for Whyte, it was just before the bell.

At that point it looked as though Franklin could come on strong in search of a surprise victory but Whyte finally began to stamp his authority on the fight in rounds 10, 11 and 12. Whyte got home with a huge right hand at the end of the 10th but Franklin did not seem to budge. At the end of the 12th Franklin was sent stumbling back to the ropes with another huge shot from Whyte but he did not manage to force through a stoppage. By the final bell Joshua was on his feet applauding. He will be licking his lips.

“They’ve always wanted to fight each other again,” Eddie Hearn said. “It’s 1-1, one in the amateurs, one in the pros. The second was an epic night and the third one will be too, but it won’t be at the o2 it will be at Wembley Stadium.

“We will see what’s next for Dillian, maybe him and AJ both have one in March and then they meet in the summer at Wembley or maybe they go straight into it.

The 27-year-old, who turned professional after just four white-collar fights, made a slow start here and shipped a number of right uppercuts in the first round against a man he had sparred countless rounds with previously. And it went from bad to worse for Wardley in the first minute of the second round, with Gorman completely busting his nose open with more right hands.

But just when he looked to be in trouble, Wardley stormed straight back, pinning Gorman against the ropes and dropping him with a huge overhand right of his own with 90 seconds left in the second. He clambered to his feet in time to beat Bob William’s count but he was down again a minute later when a right hook got through.

Gorman started the third round well, boxing smartly behind his jab, but it was short lived as Wardley again forced his opponent to the ropes and dropped him for a third time, this time with a right hand-left hook combination. He rose on steady legs and maneuvered his way through the next 30 seconds or so and was under no real pressure when the towel came in. It appeared as though the decision had been made by Gorman’s dad.

“It’s been a mental journey to throw myself into boxing as a whole,” said Wardley, who is now British champion after just 18 fights in his whole life. “So far so good.”

There was also a unanimous decision win for Derby’s Sandy Ryan but she did not have it all her own way against former two-weight belt-holder Anahi Esther Sanchez. Judges Reece Carter (100-92), Langos (99-91) and Anssi Perajoki (98-92) all made her a clear winner but she got hit quite a lot en route to the victory.

It was a frustrating night for Matchroom debutant Pat McCormack who struggled to pin down Christian Nicolas Andino but still won 60-54 in referee Carter’s view. There was no such problem, however, for cruiserweight Cheavon Clarke who dropped Jose Gregorio Ulrich in the first and then sent him to another dimension with a right uppercut 32 seconds into the second of their scheduled eight. Carter stepped straight in to call it off.

Earlier, middleweight Mark Dickinson moved to 4-0 by outpointing Gideon Onyenani 59-56 in the eyes of Carter while a couple of stoppage wins opened the show. In the first fight of the evening Dublin heavyweight Thomas Carty dropped and stopped Pavlo Krolenko after 1-12 of the fifth and penultimate round before Billericay debutant George Liddard saw off Nikola Matic after 25 seconds of the second out of four. Williams took charge of both.

VERDICT: Whyte must improve if he ever wants another world title shot.