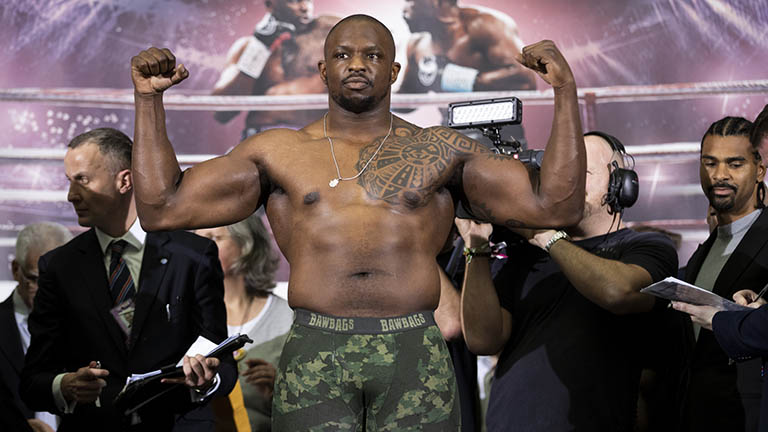 The war of words between Dillian Whyte and Tyson Fury escalates

DILLIAN WHYTE has ramped up his feud with Tyson Fury by insisting he “laid out” his heavyweight rival in a sparring session.

Whyte and Fury have been engaged in an increasingly undignified war of words amid talk of them meeting in the ring.

The World Boxing Council suggested the pair fight in a final eliminator to challenge WBC heavyweight champion Deontay Wilder, who Fury drew with in December.

Fury originally declared he would accept if a WBC ‘diamond’ belt was at stake, but he then changed his mind and taunted number one contender Whyte over the situation.

The self-styled ‘Gypsy King’ claimed he will fight Wilder on February 22 and that there is also a rematch clause in the contract, adding “it doesn’t look he (Whyte) is gonna get his shot.”

Whyte, however, still hopes to muscle into the higher echelons of a division dominated by Wilder, Fury and Anthony Joshua – despite his shock defeat to Andy Ruiz Jr last month and the loss of his three world belts – and meets Oscar Rivas at London’s O2 on July 20 to push his case.

“Tyson’s awkward, he’s long, he’s rangy, some days he might outbox you here and there, but I definitely laid him out before,” Whyte told Sky Sports News at a media workout in Loughborough.

“I definitely put him on his bottom. I don’t like talking about sparring, but seeing as he wants to come out and say, he’s put it on me in the gym and this, that, and whatever.

“Come on man, put what on who? You guys know me, you guys know what I’m like, what’s he going to put on me?”

Jamaican-born Whyte had previously welcomed the opportunity to fight Fury, and remains keen to settle their feud after his summer showdown with Rivas.

Fury followed up his December draw with Wilder by forcing a second-round stoppage on Germany’s Tom Schwarz in Las Vegas last month.

The 30-year-old is scheduled to next fight in New York on either September 21 or October 5, while Wilder is slated to defend his belt in another return bout against Luis Ortiz – and Fury has underlined his lack of respect for Whyte.

“Dillian Whyte is a heavy bag on legs,” Fury told Behind The Gloves this week.

“I punched his head in for him plenty of times in the gym and hopefully I’ll get the opportunity to do it in the ring.

“Dillian Whyte, he can’t fight, he’s a bum. He’s got no stamina, he can’t take a punch, and he’s useless, he really can’t fight.”