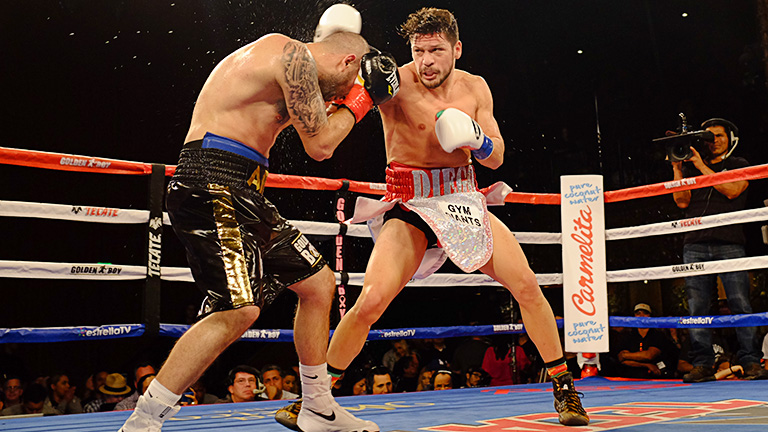 ALMOST a full year has passed since lightweight world title contender Diego Magdaleno (29-2, 12 KOs) flew from Las Vegas to the UK for an opportunity to snatch the WBO World lightweight title away from Terry Flanagan.

The American was knocked down three times in the second round of that match and took a lot of punishment at the hands of “Turbo” Flanagan before the official finally stepped in to stop the fight.

On Friday night, at the Belasco Theater in Los Angeles, Magdaleno bounced back from his mauling in Manchester by defeating Art Hovhannisyan (17-3-3, 9 KOs) by unanimous decision. All three judges scored the fight 99-91, in favor of Magdaleno.

It was almost all Magdaleno from bell to bell, with Hovhannisyan making honest attempts to disrupt the LA native’s attack but, instead, usually finding himself at the sore end of their exchanges.

In the second round, Magdaleno timed a powerful left hook as Hovhannisyan was lunging in, stopping the Armenian-American dead in his tracks.

Heated exchanges in the middle rounds resulted in a cut around the right eye for Magdaleno in the fourth and some blood on Hovhannisyan’s left in the fifth. Both were due to blows rather than a clash of heads, as some anticipated prior to the fight due to their awkward styles and Magdaleno’s southpaw stance.

In the seventh, an off-balance Magdaleno connected with a left hook that sent Hovhannisyan tumbling toward the ropes. Hovhannisyan’s left glove may have grazed the canvas in the process but the referee let the action continue without ruling it a knockdown.

In the final three rounds, on the advice of his trainer Joel Diaz, Magdaleno kept his distance, attacking only when necessary, and cruised to his 29th victory.

He now re-embarks on his quest for another world title shot. However, he may find an unsually long line to the top with former champions like Mikey Garcia, Juan Diaz, and potentially also Yuriorkis Gamboa waiting to contest another championship.