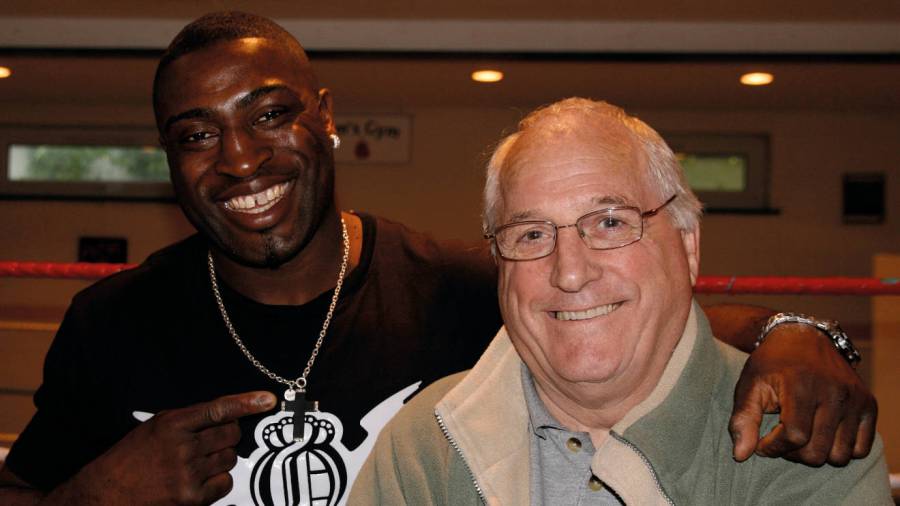 Jim Evans was a true hero within the British boxing circuit, not hugely famous outside our bubble but there were few who garnered more respect inside it, writes Matt Christie

JIM EVANS made his way down the stairs of his home in Maidenhead, turned right into the kitchen, smiled at his darling wife Georgina, sipped the tea she’d made exactly the way he liked it, placed a newspaper under his arm, walked through the patio doors, down the steps into his garden, turned left at the bottom, trotted down a small path, then unlocked the door to his own private gym, turned on the lights and eased himself into his favourite armchair. Paradise.

“It just feels like home in here,” Jim said in 2010. It was essentially a converted shed, but a big one his sons Graham and Justin erected after Jim bought a portion of his neighbour’s garden to accommodate it. Inside was everything he required. Bags at the back, ring in the middle, gloves, training paraphernalia, fighters’ training charts and a sign that read ‘Jim’s Gym’ hanging up on the walls. And, of course, that beaten old armchair nestled in the corner. Fighters and trainers of all different shapes, sizes and abilities would use the gym regularly and get advice from the old master.

On that summer’s day both Michael Sprott and Patrick Mendy came along and Jim, though his deteriorating health meant he could no longer hold the pads, put them through their paces.

Rarely moving from his chair, he watched carefully and did not hold back if he felt his charges were doing things incorrectly.

“No, no, no!” he shouted at Mendy. “Feint, then a left to the head, bend your knees and then a right under the heart. Think about what you’re doing.” Then he turned to me, rolled his eyes, and whispered, “He’s a bit special that kid. He reminds me of Dick Tiger, he can go all the way. But he’s got to listen to me and he doesn’t always listen, he’s in too much of a rush.”

Mendy had recently won the super-middleweight Prizefighter competition, netting his coach £2,000 thanks to a bet Jim placed on the 10/1 outsider to show the youngster how much he believed in him. But Mendy, then only 19, was already a little giddy with the success. He and Jim would separate and he would never become the next Dick Tiger. Evans would always speak from the heart and if the truth meant upsetting someone, so be it. Jim would tolerate flaws in technique but he would never put up with a lack of effort or dishonesty.

“As long as they tried their best, whether they were at the top of the bill or the bottom, he didn’t mind,” top matchmaker and trainer Mervyn Turner told Boxing News. “But if they didn’t, boy, they’d get a b*****king!” Sprott would get the odd b*****king. Evans didn’t hold back when he felt Sprott hadn’t given his all against Robert Helenius in 2013. After taking the heavyweight all over the world, Jim refused to work with him anymore when he started to take too many punches to the head. Sprott didn’t agree but wouldn’t hold Evans’ decision against him.

“Jim did so much for me and we had so many great times together,” Sprott said about his “father figure”. “He gave advice to all the fighters in his gym and beyond, he helped so many people by passing on his experience.”

Jim Evans was old school. He’d pick fighters up in the morning, drop them off on the roadside, tell them to run while he’d drive beside them. If he trusted them, he’d drive for a couple of miles, park his car and read his paper until they caught up. He’d make their breakfast, pay licence fees for those who couldn’t afford to, offer counsel over a tea or coffee, and his devoted wife – who ripped his heart out when she passed away two years ago – would wash their kit.

His 76-year love affair with boxing began in Regents Park when World War II was coming to a close. As casualties from the war were being rehabilitated and given the job of helping out with some boxing classes, Jim put on a pair of gloves for the first time.

“I sparred a kid in my class, I can still see it now,” Evans told me. “He threw a shot at me and I just parried it. Then it was, ‘Stop! Where did you learn to box?’ I said, ‘Me? You must be joking. I’ve never seen a boxing glove in my life’.”

He was rarely without a pair from that day on. Whether he was gloving up for his own 246 amateur bouts or placing them on the hands of the countless fighters he guided through the sport in his later years, Jim handled each pair with care. He regretted not turning professional but he quickly found his feet as a matchmaker before going on to train, manage and promote. Even in his old age, he would make regular trips to famous American gyms like Gleason’s to educate himself on different training techniques. Though he did things his own way, he was always conscious to do things the right way and he adapted his methods over time.

Evans had plenty of success as a trainer – Sprott almost secured a world title shot and Geoff McCreesh would win the British championship – but the superstar he wanted, the superstar he deserved, would remain elusive. It didn’t matter, not really, because Evans was a true hero within the British boxing circuit, not hugely famous outside our bubble but there were few who garnered more respect inside it. His contribution to the sport was so vast it could never truly be reciprocated. But Evans didn’t want a pat on the back and would shy away from praise. Simply, though he was acutely aware of the flaws in the system, Jim adored the sport of boxing and those who chose to fight.

He passed away on Saturday from prostate cancer, aged 85, a life devoted to others achieved with aplomb. We now picture him in his gym, sat in his armchair wearing his fleece jacket with a twinkle in his eye and a smile on his face. Or in the corner on fight night, commiserating with his boxer while yelling at an official because they’d scored the fight all wrong.

“If I die here in the gym or in the corner I’ll be happy,” Jim Evans said to me on that July day almost 11 years ago. He almost got his wish, too.
“A few months before he died I spoke to him on the phone,” Turner said of his last conversation with Jim, who by then was gravely ill and preparing to be reunited with his beloved Georgina. “He said to me, and I can still hear him now, ‘They [my family] want me to put me in this hospice down the road. Why would I want to go there? I’ve got a perfectly good home here.”

Stubborn to the end, Evans died with his family by his side and his gym at the bottom of the garden.