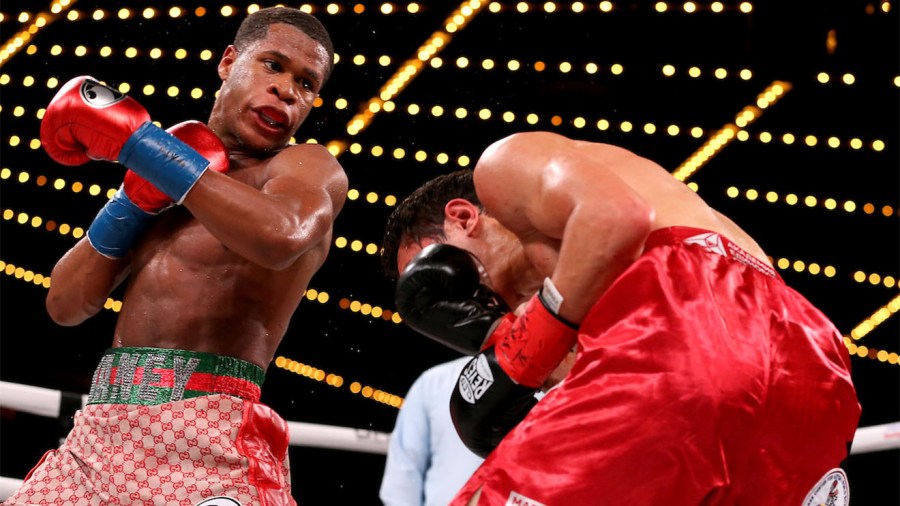 DIFFERENT promotional entities and network affiliations will prevent it from happening in the foreseeable future, but let’s imagine for a moment that Vasiliy Lomachenko agrees to make the next defence of his WBC lightweight title against his now mandatory challenger Devin Haney. Simply put, it would be off the charts.

Under normal circumstances it would be a tad ambitious for a 20-year-old who has not yet been tested on world level to take on the man considered by many to be the best in the world pound for pound – but Haney is a phenom, a generational talent the likes of which rarely come along.

Already comparisons are being made to his fellow Las Vegas resident Floyd Mayweather. And that does not only include Haney’s skill set, but a brashness as well in the way he has been repeatedly calling out Loma.

If this were an audition to work his way into Madison Square Garden’s main arena, then Haney aced it. Performing in front of what looked like a packed house in MSG’s smaller venue the Hulu Theater (Matchroom promoted), Haney dazzled in stopping Zaur Abdullaev at the end of the fourth round of a scheduled 12 for the WBC’s interim lightweight title. Charlie Fitch refereed.

Abdullaev was outclassed, having suffered facial damage in the process. His corner is to be commended for stopping it when they did.

The Russian had come forward, but Haney was so quick he could never get untracked. Punches landed over and under with a cumulative effect. Haney was setting the table for the devastating knockout he had promised to deliver, but thankfully Abdullaev was spared that.

Haney did not need a highlight reel finish to make believers of anyone on this night. His coming out party on the world stage could not have gone better.

Serrano dominated, but Hardy came out of this one with a moral victory after having been so close to being stopped in the opening round. She was in desperate trouble on the ropes when referee Mike Ortega intervened seemingly to stop the contest. But a second later he sent the fighters to their corners when the bell rang.

At that moment, it seemed only a matter of time before Serrano would get the stoppage, but Hardy, though physically overmatched, made a fight of it by moving, countering, and punching enough to keep Serrano off. Serrano’s boxing ability and firepower were a tad too much for the brave Hardy to overcome, but she did herself proud in defeat.

There is talk of Serrano facing Ireland’s Katie Taylor early next year.

Before Andy Ruiz had gotten the job to box Anthony Joshua last June, Mike Hunter had been given serious consideration for the assignment. Big fights still await the Las Vegas heavyweight, who established himself as a prime player in the division by comprehensively outpointing Sergiy Kuzmin over 12 rounds by margins of 117-110 on the scorecards of Eric Marlinski, Kevin Morgan and Tony Paolillo. Ricky Gonzalez refereed.

Hunter was too quick for Kuzmin, keeping him at bay with a jab and beating the Russian to the punch throughout. Hunter was strong on the inside and landed hard body blows.

Kuzmin, who halted David Price a year ago, tried to use his weight to wear Hunter down. But Hunter, trained by heavyweight champion Hasim Rahman, was in superb shape and handled the pace well, dropping Kuzmin with a left hook in the fifth round on the way to an impressive win which might result in him facing Alexander Povetkin next.

When an injury forced WNA and IBF super-bantamweight champion Daniel Roman to pull out of their scheduled title fight on this bill, Uzbekistan’s Murodjon Akmadeliev accepted an eight-rounder with Cartagena’s Wilner Soto.

Akmadeliev was in complete control when in the fourth round he decided to close the show by opening up with an assortment of big blows. It was stopped in timely fashion by referee Eric Dali at 1-56.

Despite Akmadeliev’s limited professional experience of having only boxed six times before, his talent level is such that he would have posed a legitimate threat to Roman had their match gone through.

Olympic gold medalist Daniyar Yeleussinov from Kazakhstan took his eighth straight since turning pro, sensationally halting Texas fighter Reshard Hicks at 2-38 of the first round of their 10. Hicks was dropped twice and on the canvas when it was stopped by referee Ron Lipton.

New Eddie Hearn signee Magomedrasul Majidov made his pro debut in a six and suffered a shock second-round knockdown against St Louis’ Tex Trismigistis, but the Azeri got up and continued to apply pressure. After getting hit repeatedly with body blows, Trismigistis was in a survival mode when Lipton stepped in and called a halt at 2-41 of the fourth.

The fight which ring announcer Dave Diamante said he looked forward to more than any other on the bill saw Brooklyn’s Wesley Ferrer win a unanimous eight round decision over Yonkers’ Larry Fryers. Lederman and Taylor had it 79-73, Roldan 80-72. Sparkle Lee refereed.

The Verdict Let’s hope we don’t have to wait too long to see Haney v Lomachenko.