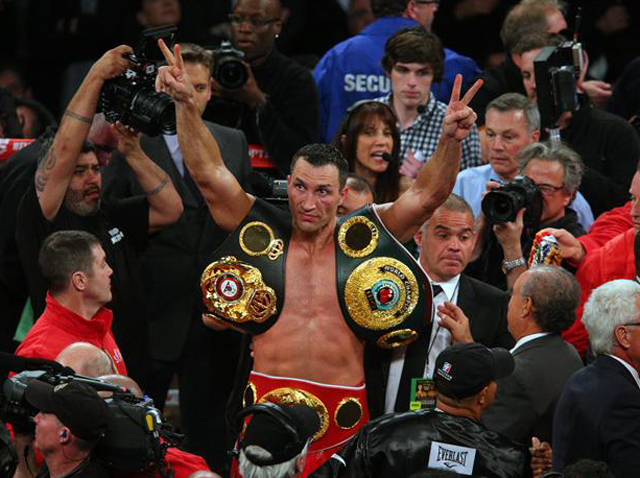 IF Santa had asked me what fights I would like to see for 2017 then Anthony Joshua vs. Wladimir Klitschko would have been high on my list and if he offered me Saul Alvarez vs. Julio Cesar Chavez as well I would have kissed him under the mistletoe –well, maybe not that. It is the best heavyweight fight out there.  After facing some less than inspiring challengers it would have been a great fight for Deontay Wilder to land and let’s not even talk about the situation Joseph Parker finds himself in. Despite his loss to Tyson Fury, Klitschko is still a dangerous opponent for any heavyweight and names don’t get much bigger than the big Ukrainian’s. Yes the former champion is 41 and has not had a fight for 16 months but he will know that a loss here would bring the curtain down on his career. Don’t overlook the fact that 53 of his 64 wins have come by KO/TKO and he has not lost a fight inside the distance for 13 years. Joshua has brushed aside every opponent he has faced but Klitschko in both status and experience is a different proposition altogether. When you are talking about heavyweights one punch can blow away all reasoned assessments in a split second but having said that I see Joshua winning inside the distance.

It is a good news bad news situation for Parker. His team moaned and bitched about Hughie Fury pulling out but they are probably glad he did. They landed the fight in New Zealand with a high bid and had to go cap in hand to the Samoan Government for help in meeting the cost of the fight. In purse bidding when you win with a high bid it commits you to paying the challenger a share that also adds up to a lot of money. With Fury no longer the opponent the purse offer conditions no longer apply and you can be sure that Razvan Cojanu will have come an awful lot cheaper than Fury. Additionally Parker will be facing an opponent who has had less than four weeks to prepare so he will have a big edge there. Cojanu is rated No 13 by the WBO and that illustrates everything that is cynical, stupid and dangerous about the way some of the sanctioning bodies do their business. Cojanu was knocked in two rounds by Donovan Dennis in 2015. In January 2016 he beat Grover Young,12-17-3 and 0-2-2 in his last four fights, on a split decision and in October beat Christian Martinez (0-3) so a guy who had never won a fight. As you might expect neither of those wins were enough to get him a rating even with the WBO. So how did he get to be rated as one of the 15 best heavyweights in the world? He did it by the magnificent feat of winning the WBO China title with a victory over Zhi Yu Wu who was 7-1 and in his last fight had been knocked out in two rounds by a body punch from British fighter Ian Lewison. Smart of Lewison to go to the body. With Wu weighing 282lbs (128kgs) he could hardly miss. Since the loss to Cojanu, Wu has shown real quality – real poor quality – by drawing with a fighter with a 1-1 record. That makes the whole WBO concept of rating nonsense. Never mind the quality read the China Champion label and be impressed. Best of luck to Cojanu and he will be well paid but the WBO are worse than a disgrace as their policy allows and in fact encourages ratings on criteria which is false and can be even dangerous.

Alvarez and Chavez. A great fight for Mexico. Not such a meaningful one for the ratings but there is a fierce rivalry involved and two proud fighters will be putting their reputations on the line with everyone in Mexico looking on. No one wants to lose in a fight like that. It will be a war because that’s the way Alvarez fights. Chavez will have edges in height and reach but has the handicap of having to make 164 ½ lbs. He has been weighing between 167 ½ lbs and 172 ½ lbs since moving up to super middle and despite the huge penalty for failing to make the weight he could struggle to do so. It would have drawn a record crowd in Mexico City but it is not bums on seats but fingers on buttons that pay the big money these days. I see Alvarez winning before the eighth round.

The usual route is for a boxer to work his way up to riches. German Mario Daser has done it the other way. The German cruiserweight had discipline problems when he was young but buckled down; worked hard and made himself a millionaire then he decided to take up boxing. The 28-year-old Daser turned pro in 2009 but was inactive in 2010 and again from July 2012 until August 2016. He has twelve wins. No names on his record and he has only fought in four and six round fights but on 19 May he faces former interim cruiser champion Ola Afolabi for the  vacant WBO European and IBO International titles. Daser is a close friend of Marco Huck and after Huck’s loss to Mairis Breidis he is determined to put a Germany up in the higher levels at cruiserweight just as Huck did.

Two fighters with well know surnames are starting out on their careers. Vicente Saldivar III turned pro this month and in Namibia Henry Simon Jr has his first fight next week. They both have a great deal to live up to as both Saldivar Senior and Simon Senor won world tiles but everyone has to start somewhere.

Whoever wins between Joshua and Klitschko will hold three titles, the IBF/WBA and IBO and this sport being the mess it is each of those bodies will be instructing the new champion to face their mandatory challenger. Namibian Julius Indongo is already getting a taste of that with the IBF seemingly about to order him to face Sergey Lipinets or be stripped of their title. Of course the WBA also have a mandatory challenger for Indongo so will want their slice of cake. The IBO is more relaxed about things like this. Indongo of course having more than one title can look at his options and decide who he wants to fight next. His preferred opponent would be Terrence Crawford which would see him thumbing his nose at both the IBF and WBA but don’t burn your bridges yet Julius.

Such a tragedy to read of the death of Nick Durandt in a road accident at the age of 53. The South African trainer/manager was a major player in South African boxing winning award after award for his work. Nick worked with over 30 world champions and produced South African champions in every division. He was a passionate lover of boxing and a larger than life character with a real talent for finding, and developing young fighters and then pushing them onwards. He is irreplaceable and his loss will cast a shadow over South African boxing as it is such a close knit community and he will be sorely missed.

The WBA have flexed their muscles over the technical decision win for Tyrone Zeuge in his super-middle title defence against Isaac Ekpo. The fight was stopped due to a cut and at the time of the stoppage Zeuge was in front 49-46, 49-47 and 48-47 and won the technical decision. The WBA have decided that these scores show how close the fight was which seems to stretch a point and have ordered a return. If no agreement is reached within 30 days then the WBA will call for bids. Only Ekpo’s team want a return. The German public does not and Zeuge does not as there are bigger fights out there for him. I wonder what the WBA would do if no one put in a bid? Did the WBA take the decision to get justice for Ekpo who was behind on all three cards at the stoppage? Perhaps not because in the meantime Zeuge has been by-passed. He holds the WBA secondary title but the WBA have ordered interim champion George Groves to fight Fedor Chudinov for their vacant super super-middleweight title even though it does not meet their criteria for a super title. That leaves their secondary champion Zeuge out in the cold. How convenient they should decided that Zeuge must now fight Ekpo again which effectively means that he could not contest the vacant super super title and opened the door for Groves vs. Chudinov, and these are the guys who parrot that the only want one champion in every division but continue to rake in sanctioning fees.

Two general observations to finish with. Too often we see fighters almost coming to blows at the weigh-in for a fight. It is usually the result of a pre-fight slanging match and where there is local rivalry the situation is that bit more fraught. Occasionally this will spill over at fight night into the arena with fans at best baiting each other and at the worst fights breaking out in the arena. The blame tends to be aimed towards the crowd for their unruly behaviour but it never seems to occur to anyone that the fans take their lead from the man they support and when he acts like a belligerent yob then it greatly increases the odds of trouble in the arena. The fighters don’t look to the fans to set an example it goes the other way. Shoving and exchanging punches and throwing tables etc. sells more tickets but every action has a reaction.

Secondly can someone explain why it is so hard to get a tape for wrapping gloves which does not fly apart? From six round prelim fights to world championship fights hardly a week goes by that the referee does not have to stop the fight because of a loose tape. He takes the fighter to the corner and the second puts on another piece of the same tape. It’s not brain surgery guys. Are you sure the providers of the tape are not making them from re-cycled post-it notes.