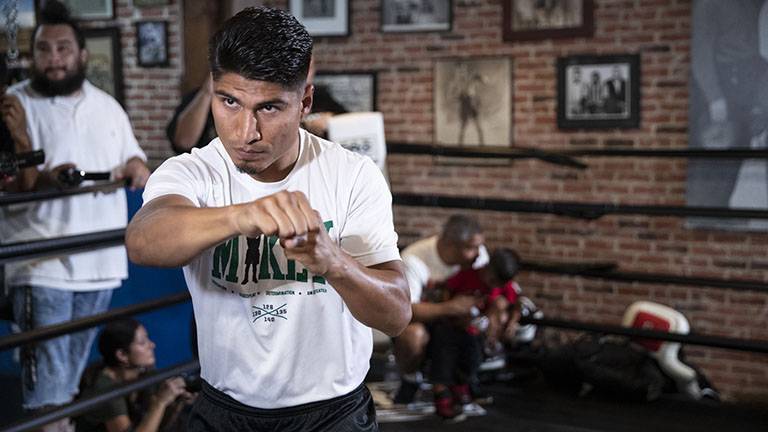 AFTER winning world titles from featherweight through to super-lightweight, Mikey Garcia daringly attempted to become a five-division champion just under a year ago. The decorated Californian made the jump up to welterweight to challenge fellow pound-for-pounder Errol Spence Jnr for the IBF crown in March. Both boxers went into the bout boasting unblemished records, yet this was no 50-50 fight.

Whereas Spence had been a welterweight for his entire career, the majority of Garcia’s time in the ring had been spent down in the featherweight and super-featherweight categories. The superb skill level of the two fighters was never in question, but with Spence enjoying such a pronounced size advantage, he was widely expected to triumph. And that he did.

Looking softer than normal around the midriff, and boxing in an uncharacteristically plodding manner, Garcia found himself consistently beaten to the punch by Spence, who made full use of his natural advantages in height and reach. At the conclusion of 12 rounds, not one of the three judges was able to score a single session in Garcia’s favour.

Following this one-sided defeat – his first in 40 contests – it seemed the wisest thing for Garcia to do would be to drop back to super-lightweight (where he got the better of Elio Rojas, Adrien Broner and Sergey Lipinets), or possibly even lightweight (where he saw off Dejan Zlaticanin and Robert Easter Jnr).

Instead, the Moreno Valley man has chosen to remain at 147lbs, where on Saturday February 29, in Frisco, Texas, he will take on an opponent who is even taller than Spence and boasts similarly long limbs. Garcia certainly doesn’t have any inhibitions when it comes to fighting bigger men.

In the opposite corner to Garcia at the Ford Center within The Star complex will be ex-WBO welterweight titlist Jessie Vargas. After previously flitting between 140 and 147lbs – latterly residing more frequently at welter – Vargas contested a 151lb catchweight fight against Humberto Soto in April last year. Vastly experienced but undersized and far removed from his prime, Soto was KO’d by Vargas in round six.

This victory was rumoured to be a prelude to Vargas becoming a fully fledged super-welterweight. However, the prospect of facing a notable name in Garcia proved to tempting for the Las Vegan to turn down, leading to him returning to welterweight.

The clash, live on Sky Sports Arena (UK) and DAZN (US), will mark Garcia’s debut for Matchroom Boxing, with whom he signed a promotional deal in December. After having been in talks with Garcia for over a year, Matchroom boss Eddie Hearn was delighted to finalise the link-up.

“I’m so happy to welcome Mikey to the team,” Hearn enthused. “He’s a standout star and I’m looking forward to working with him on big fights moving forward.”

Commenting on the Garcia-Vargas matchup, Hearn described it as having “all the makings of a [Marco Antonio] Barrera-[Erik] Morales-type war, where the styles should gel brilliantly for a real classic.” Considering that the two Mexican legends combined to produce one of the most celebrated trilogies in boxing history, this is some statement. Nevertheless, rather than feeling pressured by Hearn’s weight of expectation, Garcia and Vargas – both of Mexican heritage – are confident that they can live up to the lofty forecast.

“I believe our styles are going to make for a great battle and the fans are going to be in for a real treat,” Garcia said. Vargas concurred by stating: “It’s going to be a great showdown. He’s a warrior and so am I. We both always go for the win and do anything possible to get it. It’s one of those fights that will generate a lot of attention.”

Despite being victorious in his most recent outing, Vargas has only won three of his last seven. His best win during this sequence came when stopping Sadam Ali for the vacant WBO belt. Losing on points to Timothy Bradley and Manny Pacquiao was no disgrace, nor was drawing with Adrien Broner and Thomas Dulorme, though none of these bouts advanced his standing in the sport.

Vargas may not be the quickest, yet his steady jab is a useful weapon, especially when setting him up for two-fisted salvos. He lets his hands go freely and maintains an impressive work rate, as well as targeting the body to good effect.

Like Vargas, the energetic Garcia has a high output, though his numbers were down significantly in the Spence fight. One trait that definitely was on show when he fought Spence was his solid chin. The former multi-weight champ is a top-quality all-rounder whose long list of strengths include his versatility, timing, accuracy, shot selection, jab, combinations, ring IQ and movement.

Although it was difficult to take any positives from his loss to Spence, the contest will at least have allowed Garcia to become more accustomed to performing at welterweight. With the all-action Vargas likely to eschew his height and reach advantages in favour of getting involved in close, expect Garcia to have success with clean counters, resulting in him taking the 12-round verdict.

THE VERDICT After the Spence disappointment, Garcia must show improvements against Vargas if he wants to make an impact up at welterweight.