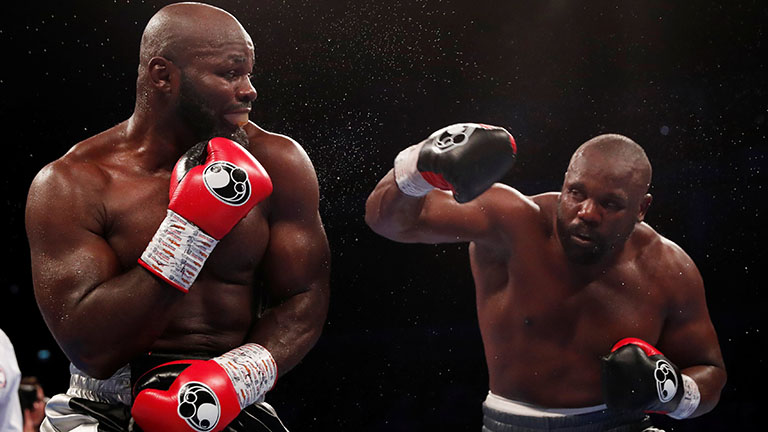 ‘WOW’ was the word most commonly used on press row when Dereck Chisora went to war with Frenchman Carlos Takam before destroying him with two right hands in round eight.

The first landed high on the side of Takam’s head and dropped him heavily. The second landed flush on his chin and crushed him. Referee Howard Foster did not need to count.

It was a wild and extraordinary fight and the Londoner now wants a rematch of his fan-friendly slugfest with Dillian Whyte, while promoter Eddie Hearn mentioned trying to snare Deontay Wilder for Del Boy.

Chisora spent most of the first round with his back to the ropes in his own corner. Sometimes he let some good work go on the inside, but two or three times Takam burst through the gates with both hands and seemed to shake the Finchley veteran.

They battled through the trenches in round two, trading bombs in close with no quarter asked and none given.

The exhausting work continued in round three as the punchstats mounted for both men.

Both were guilty of coming out of clinches with their chins up, and getting tagged for their troubles but it was breathless stuff.

There were some superb exchanges on the inside in round five and Chisora was enjoying it so much he had to be persuaded to go back to his corner as he encouraged the crowd to get behind him.

What a superb fight.

And then came the coup de grace. Unexpectedly yet brilliantly delivered, a sledgehammer shot that spelt the end for Takam but rejuvenated the English heavyweight’s career.