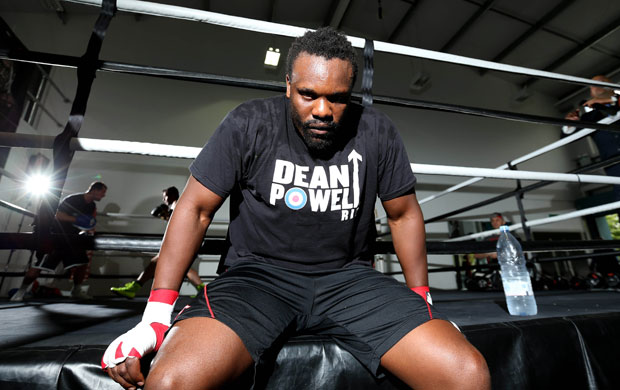 DERECK CHISORA roared, “there’s no place for Tyson Fury to hide” as he builds towards the big showdown with rival Tyson Fury at Manchester’s Phones 4 U Arena on Saturday July 26.

European heavyweight champion Chisora opened the doors to the media at his new Mill Hill gym and gave a glimpse of how he intends to make the first defeat on unbeaten Fury’s record.

The Finchley puncher was in a fiery mood with the fight just over a month away and says he’ll chop 6ft 9in Fury down to size with body shots.

Chisora and Fury clash in The Fight For The Right with the winner getting the number one spot to challenge reigning leader, Wladimir Klitschko.

“He’s a big guy and I’ll be looking to smash his body up with my punches,” Chisora said of Fury, who outpointed him in the summer of 2011.

“He’ll definitely fall from a body punch, he won’t be able to stand the heat that I’ll be bringing, I’ll be chopping him down like a tree,”

“There’ll be no place for him to hide in that ring and I’ll be hunting him down until he’s got nowhere to go and I’ll nail him, by the time I’ve finished with him he’ll be the size as me!”

“I don’t want to hear any excuses from him after the fight, he’d better be ready because he’s getting knocked out.”