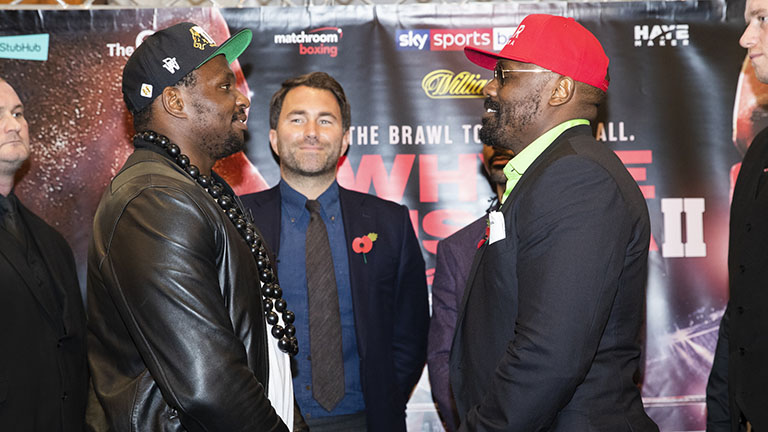 'I’m a massive risk taker and I’ve been like that my whole life,' Dillian Whyte says ahead of Dereck Chisora fight

DERECK CHISORA relishes his December 22 rematch with Dillian Whyte, though he is adamant he was keener to make the fight than his London rival.

“Everybody wanted it. I wanted it more,” Chisora said at a press conference in London Thursday. “I hold the golden key, so the fight is on. I’m excited. I know I’ll be facing a very difficult opponent in Dillian Whyte. I’m just chuffed.”

“I’m going to knock this sucker out.”

Whyte beat Chisora on a close points decision in 2016 and bad blood still lingers between them. “I want to shut him up,” Dillian declared. “This time I’m definitely going to knock him out.”

Many see Whyte as the most likely man to challenge heavyweight champion Anthony Joshua next year. He risks that against his London rival at the O2 Arena in December. “I’m in this game to give the fans proper fights,” Whyte explains. “I want to give the fans fights they’ll remember 50 years after I’m done.”

“To be great you have to take risks,” he added. “I’m a massive risk taker and I’ve been like that my whole life.

“I don’t make excuses, I just get in there and fight.”

Turning to Chisora he said, “You threw a table at me last time and I didn’t even move.” Adding ominously, “I have no fear of you.

“Dereck’s going to look like roadkill after the fight.”