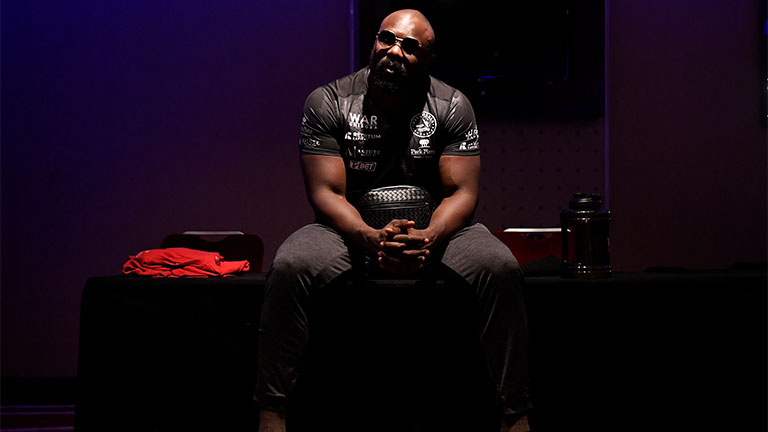 Dereck Chisora has wanted to fight David Price since seeing him in Boxing News' amateur rankings. Now he gets his chance

DAVID HAYE: “I WAS a little worried when Joseph Parker pulled out, but fortunately we were able to get an opponent who will pose plenty of questions. David Price is so big. He’s got long arms and he’s a big, big hitter. I’ve sparred many rounds with him over the years. On his day, if you don’t take him 100 per cent seriously, if you allow him to land that big right hand, you’ll be in trouble. Dereck has sparred with him a couple of times before, so he knows what he’s about. I believe he’s going to bring the best out in Dereck.

“We’ve been working with each other for a year now and things have moved in the right direction. He’s doing all the things that a professional athlete should do. He looks like a different animal. He realises that he’s at a stage in his career where he can’t afford to have a lacklustre performance. If he wins this and then another big one, he could be mandatory for a heavyweight championship belt.

“Everyone in British boxing knows Dereck and David’s stories. They’ve had hard fights throughout their careers. They’ve had wins, they’ve had losses. They’ve come back and shown resilience and heart. This is a massive crossroads fight. For the winner, the future looks bright. But for the loser, it’s not an ideal situation. There’s a lot at stake.

DERECK CHISORA: “DAVID PRICE is a totally different fight to Joseph Parker, but I’ll still fight the same way. People tend to mess around if you let them mess around, but not if you just go in there with your head right on them and go for it. Parker was a bigger fight globally, but I think this is a bigger fight for the British public.

“It was very good sparring [with Price]. You would’ve paid money to watch it. It was a long time ago, though – about seven years ago. A lot’s changed since then. He might look back at that sparring, he might look at my old fights and my recent fights, but to be honest, it’s totally different. Fighters are different when they get in the ring. You never know what you might get.

“I’ve known [Price] since the amateur days. Back in the day, I remember looking at the amateur rankings in the back of Boxing News and David Price was number one in the country. I remember thinking, ‘Who the f**k is this guy?!’ Then one day they put a picture of him in Boxing News and I was like, ‘Wow! Big guy from up north.’ I wanted to take him off that top spot, but we never got to fight.

“David Price is a big puncher. If he lets that right hand go, he can put anyone to sleep. The way he boxed against Dave Allen was amazing. He used that long jab. The guy’s a good fighter but he’s got demons in his head sometimes. But I’ve got worse demons in my head – my demons are crazy! If you hit me with a sledgehammer I’m still coming. If you could mix my mindset with his body, Jesus Christ, it’d be the one. The guy would be untouchable.”