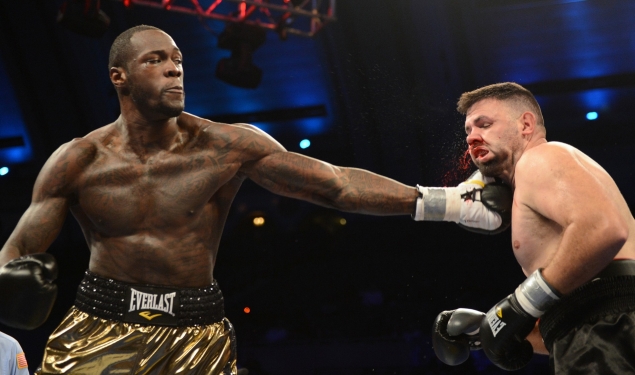 The (boxing) world according to Deontay Wilder

“MY name is Deontay Wilder. I am a different fighter. I am not just another boxer. I know my skills and I know my ability. My thing is, the hard work is done in the gym. Since I started boxing, nothing and I mean nothing has ever been given to me.

“Nothing in the back of my mind says I can’t go past four rounds. When the lights go on and the action starts – that is the fun part for me. I want to make it easy and I want to make it a short night because I don’t get paid for overtime. There is no need for me to stick around for overtime but if the fight needs to go past 12 rounds, bring it on. We can go back to 15 if you want to do it. We can up the price on it. There are no concerns and no worries in my mind, and I promise you, if it goes past four then so be it and the people get their money’s worth. If it goes less than four, so be it. But I train for a great fight. We both train hard and we both want it. It’s a highly anticipated bout and the best man will win that night and I already know who the best man is. You talk about all this experience, and really if you want to break it down, I have the most experience. Just because you started boxing earlier doesn’t mean you have more experience than me. For experience you have to work. You can’t go to a job and say ‘I have experience’ and not put in any work. Some guys – the average heavyweight ‐ don’t even get in the gym until they have a fight coming up. I go to the gym like it’s my job, my 9‐to-5 job, every day. I don’t miss a day.

“The things I do make your eyes not believe. Your mind definitely plays tricks on you. On the outside of the ring you see one thing but on the inside of the ring is a whole other different thing. It’s unbelievable. Like ‘How did it happen like that?’

“We will find out and we will see that is has not been choreographed, for sure. They go off on beating one opponent – beating a Chris Arreola. They go off of beating him and said they paid their dues, but I have one guy on my resume that would kill all of Bermane’s opponents on his record and he goes by the name of Malik Scott. He would beat them hands down. I am willing to put my purse on it that he would beat any opponent that he has on his resume. Everybody can think what they want but when it comes to the night of the fight the truth will reveal itself. I am super‐confident in what I can do. I am super‐confident and I can’t wait. Someone is going to lose their job. I am going to put his whole team out of commission.