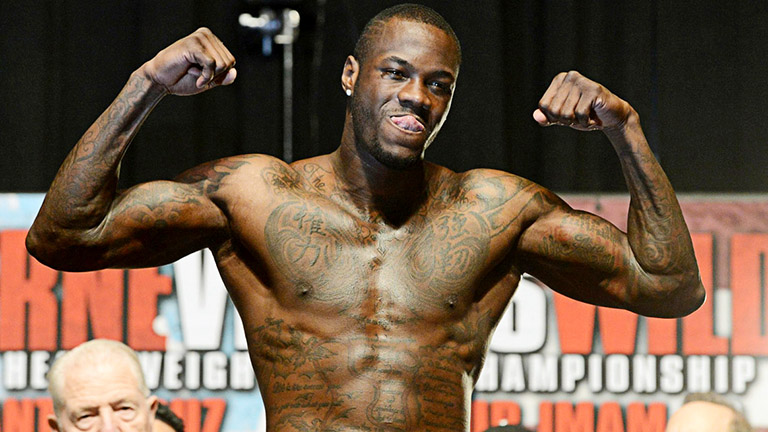 WBC heavyweight champion, Deontay Wilder was ringside in New York to see Wladimir Klitschko complete his latest defence of the other three world titles in the division. The Ukrainian’s performance against Bryant Jennings did not impress Wilder. “To me his age is showing. He’s getting older,” the American said of Klitschko. “His age is definitely getting to him and it showed in the Jennings fight.

“He was slower, he wasn’t always accurate with all his punches. He still has stamina problems. That’s what I got out of that fight.”

The WBC ruler hopes for a heavyweight unification clash with Klitschko next year.

“He’s got a lot of mandatories lined up. I’m definitely not going to sit around. I told people all the time I want to be a busy heavyweight. I want to be active and I promised people that,” Deontay said. “2016 it happens, it happens. That’s a title not if it’s going to happen but when it’s going to happen. If you ask me, that’s something on his behalf that should happen earlier rather than later. Because he’s getting older. I’m still a young guy. There’s still a lot of things that I can adjust to, I can get good at, I’m still growing. There’s nothing he’s going to change from this point on. He’s still got the same style, he’s still got the same movement, there’s nothing going to change.”

In the mean time Wilder insists he will remain active. Recovered from a hand injury, he boxes Eric Molina on June 13. After he plans to fight in September, then December or January. It’s means he’s keeping a look out for opponents. David Haye, should he return to the ring, has expressed on interest in fighting Wilder, after some tune-up contests. “In the future David will be a great opponent,” the American said. “I like that fight. We’ve got to see what we’ve got to see. Is David still the same guy from all the injures and stuff like? That’s definitely something in the future.”

He continued, “While [Klitschko] is having his mandatories, I think me and Jennings having an all-USA clash, I think that would be a great fight before the Klitschko fight.”

Wilder did want to make his first world title defence against Britain’s Tyson Fury. “His team has other plans and I understand that. When I was coming up, we had goals we had plans that we wanted to do. We followed those plans. By following those plans I became the champion. I understand that part of business and what they want to do. It’s just like Bryant Jennings was my mandatory but they chose to go to Klitschko. Fury, they’re choosing to go Klitschko, which I understand. He’s the older guy. They feel like they’re younger. They may have something more that they can prove in the ring, instead of going to another young guy, that’s athletic and strong, has speed and heart in the ring. So I understand,” Deontay said.

The WBC champion feels like Fury could well upset Klitschko. “I think Fury, due to what we saw in Klitschko’s last fight, I think Fury has got a high percentage chance. It’s going to depend on Fury, how seriously he’s taking it. Is he really about the glory or the money?” Wilder said. “In my opinion I think it’ll only be up to Fury and what his mindset is towards that fight. I definitely think he’s got a high percentage chance of being able to beat him. He’s a taller guy. It would be harder to lean on him. Of course, we’ve seen many times that smaller guys have hit Fury and he went down. The question is, if Klitschko connects, will he go down? If he goes down, will he get back up?”

“I want to be the undisputed heavyweight champion of the world. That’s my goal,” Wilder continued. “What I want to do is not finished. This is just the beginning, a stepping stone.

“Even though I’m the WBC heavyweight champion of the world my heart still feels like a contender.”