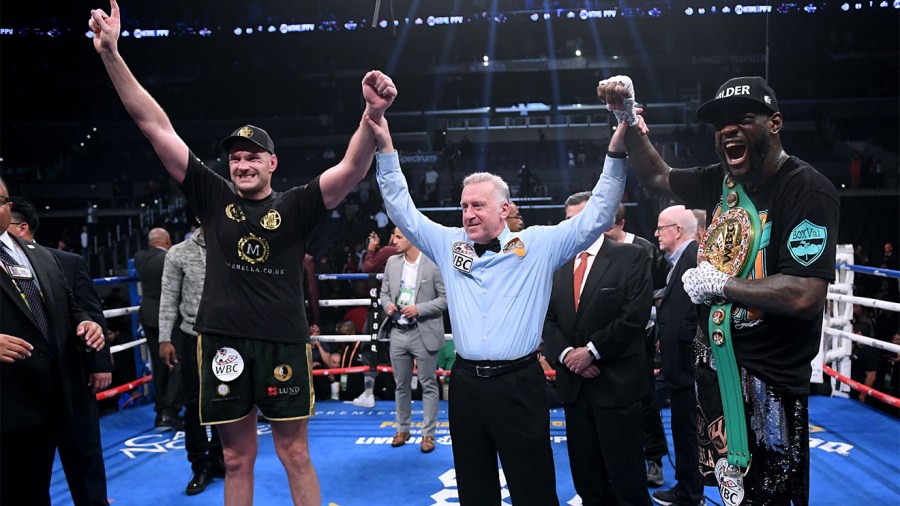 IT’S all about history these days. Making it. Going down in it. And whoever wins Saturday’s night’s mouth-watering rematch between Tyson Fury and Deontay Wilder in Las Vegas will take their place in it, we’re told, alongside the greatest fighters in history.

It’s been a long old journey for Fury, the UK’s favourite Traveller. He’s always engrossed us, from his days as an amateur, when his sheer size turned heads, right through a professional career that for many years, don’t forget, struggled to be taken seriously. He punched himself in the face, mid-fight, to become a YouTube sensation. He was gifted a decision against John McDermott. He struggled to get himself in shape. But at some point around 2013 to 2014, when he defeated Steve Cunningham, David Haye gave him the slip and he trounced Dereck Chisora in a truly masterful performance, he exhibited his true championship potential.

Even so, his 2015 victory over long-time heavyweight leader Wladimir Klitschko surprised pretty much everyone. In an alien German land, he boxed the perfect fight to take the world heavyweight crown. It should have been the start of a long reign. Yet his fortunes plummeted. The mainstream press, new to Tyson Fury, took an instant dislike to his obscure charm. News of a failed performance enhancing drug test broke. The Klitschko rematch was aborted and Fury descended into alcohol and cocaine abuse that gave his lifelong enemy, depression, very much the upper hand. They were dark, dark days. Photos of him in a bad way, obese and lost, were everywhere. Irrespective of the mistakes he made, the subsequent turnaround in Fury’s fortunes should only speak exceptionally highly of the man.

By the end of 2018, after two nondescript comeback wins, he got into the ring with Deontay Wilder and, bar the odd lapse in concentration, showed the world – a more appreciative world this time – exactly what he was about. The way he rose from the brink in the last round was truly historic stuff. He deserved more than the draw he received in Los Angeles that night. Yet the sense of injustice has only taken Fury to greater heights. Today, he stands tall as one of the most recognisable men on the planet, the ‘people’s champion’ with millions of pounds in the bank.

All he needs to do now is to score his first official victory against a proven world class opponent since he ousted Klitschko a little over four years ago.

Waiting for him is another man whose legacy hangs in the balance. Plenty are calling Wilder the greatest heavyweight puncher in history. But the tag speaks of how lightly ‘history’ is regarded by those who only live in the present day. Without question, Wilder has truly bewildering power and may well whack harder than any other champion who came before. But to put Deontay above the likes of Joe Louis, Rocky Marciano, Sonny Liston, George Foreman and Mike Tyson (who between them, can boast the scalps of Jersey Joe Walcott, Archie Moore, Floyd Patterson, Joe Frazier and Larry Holmes, among many others) is perhaps premature when the most accomplished fighter Wilder’s stopped is Luis Ortiz. That’s not to blame Wilder, of course, it’s more a plea for some perspective – and patience.

Let’s say Wilder fails to land a glove on Fury for 12 rounds. Will we still call him the greatest puncher who ever lived? Imagine Fury gets flattened inside 15 minutes. Will his name still be up there with the leading legends of the game? Probably not, but the winner will see their standing soar regardless.

Whatever happens we should be thankful that this fight is taking place. Wilder needs Fury and Fury needs Wilder. The winner will then need Anthony Joshua and Joshua will need the winner. Waiting below is Oleksandr Usyk, Dillian Whyte, and Joe Joyce or Daniel Dubois. The list, for the first time in a long time in the heavyweight division, goes on and on.
Fury and Wilder have achieved considerable feats so far but, when it comes to making history – really making history – they’re only just getting started.