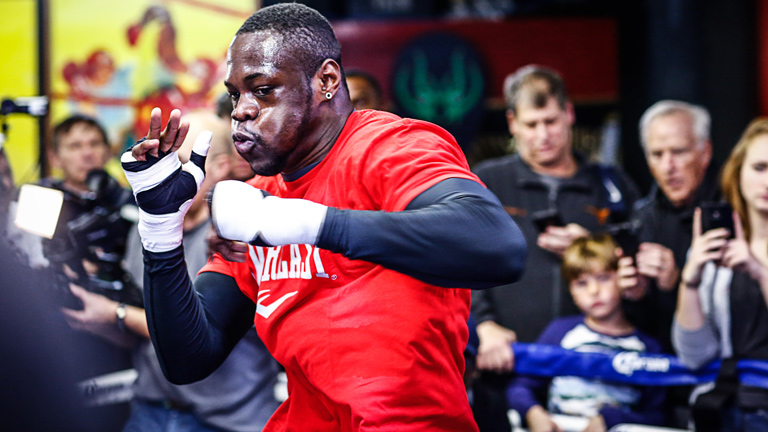 DEONTAY WILDER is not letting the legal battle his team is engaged in with Alexander Povetkin’s representatives distract him from his upcoming WBC heavyweight title defence against Chris Arreola.

Wilder was scheduled to fight mandatory challenger Povetkin in May, but the Russian returned a positive result of 0.07 micrograms per milliliter of meldonium – a banned substance – prompting Wilder to pull out of the fight.

Povetkin’s team proclaim innocence and the two sides have each sued the other, resulting in a spiteful legal to and fro, but Wilder is blocking it all out.

“I haven’t been on a close watch of it. I’ve definitely been following it. It’s ridiculous, if you ask me. I’ve got served papers and everything. I’m not letting it knock me off my game, my focus. It’s just part of life, you know what I mean. I’ve been through worse situations in life. It’s just a bad storm – another storm that I have to weather in my life,” he said.

“My skin is tough. That’s in all aspects of life, no matter what. I go through things to have a strong testimony because I know that somebody may, throughout my year, somebody may go through the same thing and I can give them advice on how to do it.”

The World Ant-Doping Agency (WADA) included meldonium on its list of banned substances on January 1, but has stated that levels of less than one microgram do not require an athlete to stop competing.

Povetkin’s team maintain that their fighter is not a drug cheat.

The WBC are currently investigating the issue and may still grant Povetkin his mandatory shot but, for now, Wilder has been allowed a voluntary defence, which he makes this weekend against Arreola.

“This is just a test for a strong testimony in the end of my life. So with that being said, I’m very focused. I’m always focused. When you’re in the hurt business, you have no choice but to stay focused on the test that lies at hand because if you’re not focused, you can get knocked out. No one wants to feel what it feels like to be knocked out, wake up in the hospital, don’t know what happened,” he continued.

“You never want to be that guy that didn’t even know the end of the round has ended because you’re dazed or you’re unconscious.

“I train hard. I meditate. I visualize what I want to do and I go get the job done. This is a tough job to be the Heavyweight Champion of the World because everybody wants what you have. Everybody trying to get it and you’re trying to keep it.

“As far as I’m concerned my future is bright.”

Povetkin and his team recently met with the WBC to provide evidence in the case and the WBC have invited Wilder to do the same.

Lou DiBella, Wilder’s promoter, shares Deontay’s sentiment of compartmentalising the issue for now, at least until after the Arreola fight.

“We have lawyers obviously as do Povetkin’s people. We’re having conversations right now with the WBC about an opportunity literally to be able to do the same thing Povetkin’s people did. But that’s not for Deontay to be worried about right now. There is a fight on the 16th. That’s where everyone’s attention is. The rest of that stuff is going to take care of itself,” he said.

“But frankly, the WBC, we respect their process and we want to get our points across. But this is ultimately going to be decided in the U.S. courts in the southern district of New York where there are lawsuits pending. So this is a legal matter. It’s nothing that the fighters are worried about right now.”