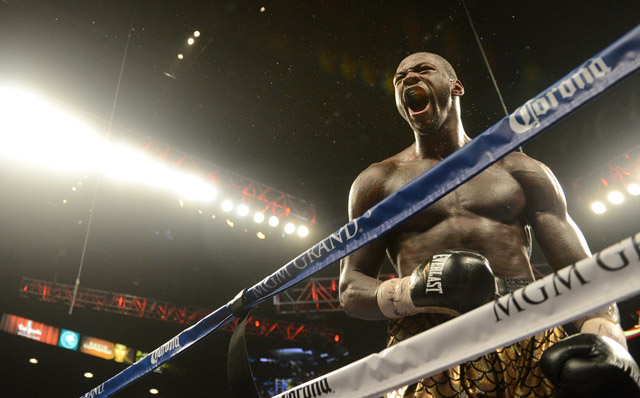 AFTER a struggle with Artur Szpilka, that Deontay Wilder ultimately settled with a devastating right hand, the WBC heavyweight titlist sketched his plan for the future. He was surprisingly adamant that he wanted to meet his mandatory obligation, high calibre Russian Alexander Povetkin, and then take on the WBO and WBA champion Tyson Fury.

The difficulty he had with Szpilka at the Barclays Center in Brooklyn on Saturday has not discouraged him. “With Szpilka, he was more mobile, he was slicker. I haven’t faced a southpaw for three years so it took me a bit more time to adjust than I thought I would,” he said. “It’s been a year that my hand’s been sore. But now it’s back, it’s 100% and I’m still a dangerous fighter.”

“When I crack you with that right hand, things are going to happen,” he continued. “My right hand is a monster, sometimes I scare myself… When I hit him, I knew it was over then.”

He wasn’t however willing to travel to Povetkin’s homeland. “It’s time to welcome him to the United States of America. I don’t think he’s fought in America yet and we all know to have a big name you must get the American fans on your side,” Deontay said. “It’s too cold in Russia,” he added with a smile.

Tyson Fury confronted Wilder immediately after he knocked out Szpilka and Wilder is more determined than ever to take on the outspoken Briton. “I don’t take the guy seriously at all. Let’s face it, we know he likes to entertain, he likes to promote, which is a good thing but I just wasn’t in the mood today. You’ve got a man on the ground, he’s hurt. He might be good right now but we don’t know what’s going to happen tomorrow. I just wasn’t in the mood,” Deontay reflected. “Fury’s just being Fury. He’s unpredictable.”

But Wilder cautioned, “I feel like it’s time to shut up and put up. It’s time to get it on.”

“We’ve been trying to fight him for a while,” the American continued. “We’ve been promoting this thing for four years.

“It will be the biggest heavyweight fight in a long time and I will go to the UK for that one.”