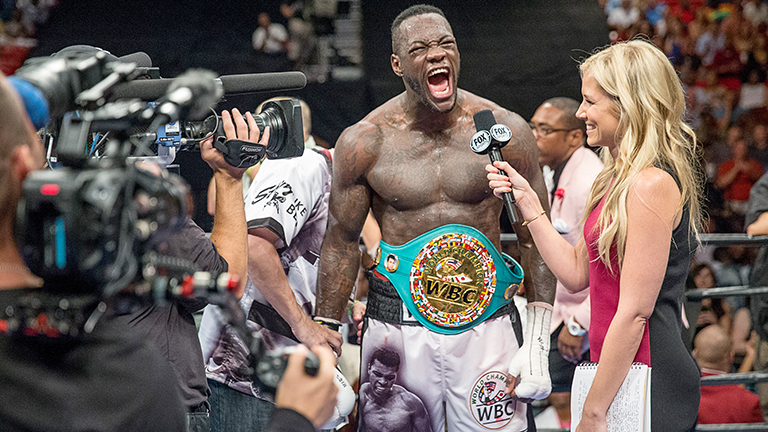 Deontay Wilder feels Gerald Washington is in over his head

DEONTAY WILDER believes he is progressing towards fights with Joseph Parker and the Anthony Joshua-Wladimir Klitschko winner as he prepares to defend his WBC heavyweight title against Gerald Washington next weekend.

The unbeaten American was scheduled to fight Andrzej Wawrzyk but the Pole failed a drug test, meaning Wilder’s compatriot Washington was traded in as an opponent.

Should he prevail – as he is expected to – Wilder hopes mouth-watering fights with other leading heavyweights can be made this year.

“I think I’m close to unifying the belts. I think this year will be a big step forward,” he said.

“A lot of people are talking about it and my team is 100 percent on board with it. We’re taking the right approach to getting me in the position to get all the belts. There are going to be a lot of great heavyweight fights this year.”

Unbeaten Washington stands at 6′ 6”, just one inch shorter than Wilder. He knocked out Ray Austin in his last outing in July.

Wilder looks forward to facing a fellow giant, which could serve as decent preparation for potential fights with Joshua, Klitschko or even Tyson Fury, should he return to boxing.

“Gerald Washington is a tall, athletic fighter with good size and power. I don’t have the physical advantages and it’ll make the fight exciting. It’s two tall, athletic guys going at each other. It’s going to be an even playing field and there’s nothing like seeing a tall man go ‘timber’,” he said.

“I prefer fighting taller opponents. I can see a lot of things easier against a taller fighter. I take every fighter seriously, especially when they’re eye level. I know that I can be punished if I make a mistake and if their experienced enough to capitalize on it.

“Washington doesn’t know what’s coming for him. I think he’s overwhelmed with the excitement of having the opportunity to fight for a world title. He said a lot of similar things that I said coming up, but I don’t think he knows what February 25 has in store for him. He’s facing one of the most dangerous fighters in the division and I’m glad that he’s saying he’s ready.”