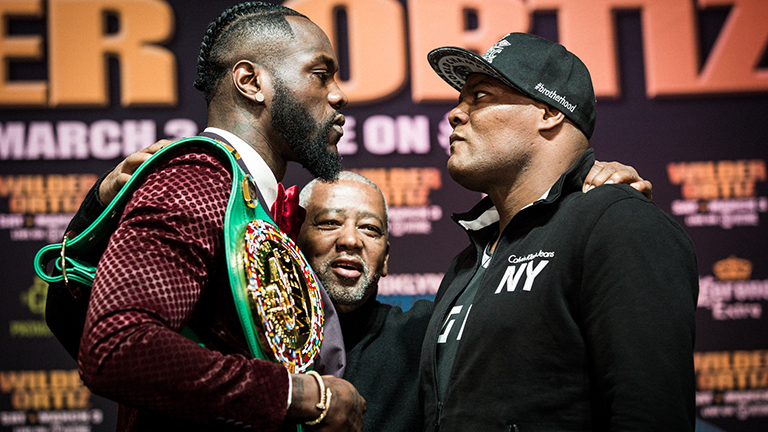 Probably a correct assumption to make, it achieved this to some extent. Wilder, in outlining his own schedule and removing himself from the equation, put a stop to Joshua and anyone else using his name to try and sell Joshua vs. Ruiz as some sort of next step to Joshua vs. Wilder. He would say he took the power back.

Now, of course, it hardly matters. Joshua, having lost to Ruiz in a stunning upset, won’t be meeting Wilder anytime soon, nor will anyone be all that interested in seeing the two share a ring in 2019. Instead, thanks to a Mexican-American with a life-changing left hook, the division has been turned on its head and soon Joshua will be thinking only of revenge as Wilder focuses all his energy on doing a better job on Ortiz than he did first time around in 2018.

“To all my fans, I want to announce that Luis Ortiz and I have signed for a rematch, with the date and site to be announced shortly,” Wilder, 33, wrote on social media last week. “All my controversial fights must get dealt with ASAP!”

As news of Wilder vs. Ortiz II broke, many were quick to deride the champion for fighting someone other than Joshua, or even Tyson Fury, the other Briton with whom Wilder shares a December draw. The rest, meanwhile, questioned Wilder’s use of the term ‘controversial fight’, pointing to the fact the American, despite some rocky spells, still ended up stopping Ortiz inside 10 rounds last March. (Controversial is a phrase more applicable to Wilder’s draw with Fury.)

But that’s unfair. Based on the pair’s brilliant first encounter, as well as Ortiz’s form since that night, a rematch between Wilder and the Cuban is a marked improvement on Wilder’s last outing against Dominic Breazeale, Tyson Fury’s upcoming bout with Tom Schwarz (on June 15) and, on paper at least, Joshua’s ill-fated defence against Ruiz last weekend. It’s an upgrade because Ortiz, though 40, boasts a skillset beyond the comprehension of most in the division and is arguably the best heavyweight without some sort of title (if we imagine Fury’s lineal heavyweight title is actually something tangible).

Remember, before being stopped by Wilder, Ortiz dominated the majority of their fight from centre ring and hurt the champion on more than one occasion. He used poise, patience and refined moves to keep Wilder off balance and wary of setting his feet. He controlled the ring. His defence was tight. He seemed, by the halfway mark, to be en route to securing an upset win and applying the first loss to Wilder’s unbeaten record.

That Ortiz ultimately fell short says as much about Wilder’s incredible knockout power as it does Ortiz’s limitations or propensity to fade late in a fight. Moreover, the fact it is considered Wilder’s career-best win owes everything to Ortiz demonstrating, for six or seven rounds, a level of technical ability most in the division lack.

“Ortiz was getting ready to stop him and Ortiz is at least 45 years of age,” Chris Byrd, a former IBF and WBO world heavyweight champion, told Boxing News last year. “If he had thrown three or four more punches, he would have stopped Wilder.

Byrd, a fellow southpaw who often battled bigger heavyweights, appreciates what he sees when he watches Ortiz, as does Larry Merchant, a former HBO stalwart, who told me a couple of years ago, long before Ortiz even fought Wilder, that the Cuban was perhaps the best heavyweight of the lot. “Ortiz is the unknown among the unknown,” he said. “He has the least sale-ability. But, if fighting any of the current champions, I don’t see which one of them beats him.”

This is not an attempt to sell Ortiz as a Wilder opponent, nor an attempt to say Ortiz, a man with a chequered history of failed drug tests, is the heavyweight contender we need in this time of confusion and disarray. (He certainly isn’t.) Rather, it is merely pointing out that, in terms of alternative options, Luis Ortiz, 31-1 (26), is far from the worst and is in fact the kind of heavyweight the likes of Joshua and Fury have yet to face. He was dangerous first time around and will likely be dangerous, for all the same reasons, in the return. What’s more, Andy Ruiz’s breakout moment at Madison Square Garden on Saturday was a timely reminder that nothing can be taken for granted in the heavyweight division and that every time a champion sets foot inside the ring, whether as heavy favourite or not, there is no certainty they will leave with their titles or faculties intact. It also served to remind us that while the iron’s hot it’s probably a good time to strike.