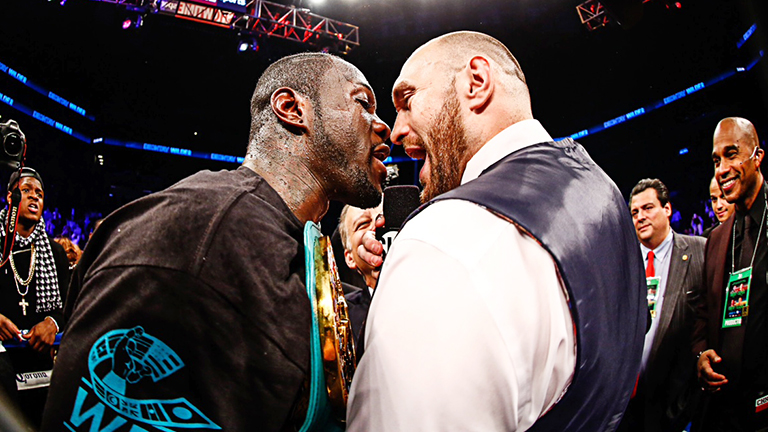 TYSON FURY stormed the ring at the Barclays Center in Brooklyn, New York last night to confront Deontay Wilder after his stoppage win over Artur Szpilka.

The American defended his WBC world heavyweight title with a stunning right hand in the ninth, though had not had things his own way before then.

Fury, who owns the WBA and WBO straps and is considered the best in the division after defeating Wladimir Klitschko, interrupted the post-fight interviews in a bid to set up a mouthwatering unification clash.

“There’s only only Tyson Fury!” he yelled in Wilder’s face.

“What have you got to say about that Deontay?”

Wilder, never one to shy away from a verbal spar, responded: “You’re just a phony. This is just an act. You know where I am. You know what time, what place. I ain’t scared of nobody, I’ll come to your backyard, baby.

“When you do step in this ring with me – if you do because this should’ve been done a long time ago – you can run around like you’re a preacher all that you want but when you step into that ring I promise you I will baptise you.

All the while Fury had been yelling back, insisting he would travel to Wilder’s “backyard” to fight him and even took off his suit jacket as he prowled around the ring, apparently ready to square off there and then.

However, Wilder must now finally fulfill his mandatory obligation against Russia’s Alexander Povetkin while Fury is tied into a rematch with Klitschko, though neither fight has been formally announced yet.