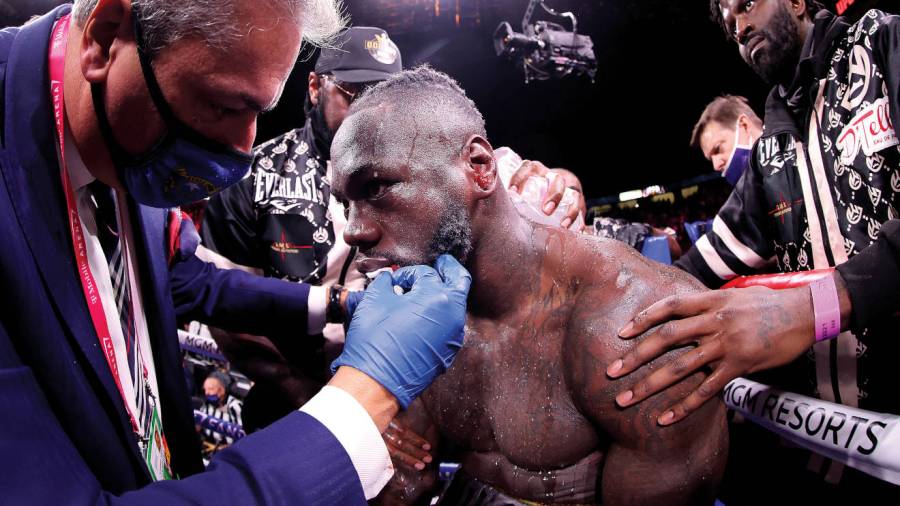 It doesn’t matter that Deontay Wilder took a while to congratulate Tyson Fury, the important thing is that he did so, writes Matt Christie

DEONTAY WILDER did the right thing and sent his congratulations to Tyson Fury several days after their incredible third bout. The social media post, full of respect and gentlemanly outpourings, was far more agreeable than Wilder angrily rejecting Fury’s offer to kiss and make up in the immediate aftermath. Following that incident, Deontay was criticised by pretty much everyone.

It has always struck me as a little peculiar that the post-fight actions of a boxer are judged so harshly, particularly after a harrowing loss. Frankly, if Wilder didn’t want to make friends with the bloke who had just spent the previous 40 minutes aiming punches at his head, and a sizeable chunk of the last three years psychologically tormenting him, then so be it.

Yes, Wilder’s failure to comply with one of boxing’s most precious unwritten rules – when the fighting stops, embrace – was disappointing but surely not surprising given the trauma his brain had just endured. In fact, if you really think about what Fury put Wilder through, it would have been more of a surprise if Deontay immediately hugged the man who called him a ‘dosser’ so many times the insult will forever be associated with him; who teased him by getting up off the canvas four times (on two occasions Wilder did a premature victory dance); who beat him up for most of their rivalry and essentially turned him from someone being touted as the most dangerous heavyweight in history into a former belt-holder with three indelible blotches on his record.

Boxers who have just taken a pounding do strange things. Just like anyone would. The body is in a state of shock. Their pride is in tatters, too. I’ve seen friends and family act atrociously after losing a game of scrabble, it’s little wonder fallen boxers don’t always take kindly to being beaten. Though the majority do, not all can behave rationally.

One thinks of Marlon Starling in 1989, speaking minutes after Tomás Molinares had knocked him cold with a punch after the bell. Clearly still in cloud cuckoo land, Starling said: “A punch didn’t put me down… He [the referee] counted me out? When did he count me out? I wasn’t knocked out because I wasn’t even knocked down.”

In short, wait for the senses to realign. Once Wilder had taken stock of the situation and reflected with a clear mind, he did the right thing. His lack of sportspersonship, admittedly a theme throughout the trilogy, was replaced with wishes of goodwill to the man who brought out the worst in him. At last, after a long time showing none, Wilder exhibited humility. It was the ending the engrossing rivalry deserved.

– IT was no surprise to hear Eddie Hearn’s recent admission that pay-per-view events will form part of the DAZN schedule as and when PPV is necessary to stage the biggest fights. Nor was it a surprise to see some of the hardcore lose their minds over it on social media.

Hearn, at least when in conversation with Boxing News a few months ago, admitted that PPV would find its way on to DAZN in the not too distant future. That move is understandable given the state of the boxing marketplace in the modern era. The problem for fans, and it’s one that I empathise with wholeheartedly, is the seemingly never-ending rising costs just to watch the sport we love. That can directly be related to an increase in PPV events over the past decade, which in turn has created an expectation among certain fighters that they will get PPV purses every single time. Hearn must take some responsibility for that. In turn, he must work hard to fulfil our expectations when it comes to PPV.

It is hard to shake the feeling that fans’ loyalty and desire to watch everything is at a constant risk of being exploited. Speaking only personally, I can live with PPV if I feel the events offer value for money. Hearn insists that will be the case moving forward but it isn’t only him who should be under the microscope.

The pressure is now on all broadcasters. With the cost of living increasing at a concerning pace, it is inevitable that consumers will make some tough choices regarding what they choose to pay for. On the one hand, it could be argued that competition to stage the best events will lead to only desirable bouts being made on all channels. On the other, however, we must point to several different promoters working with just one broadcaster, and very little desire to share their prized assets. Consequently, the best fights might turn out to be harder to make than ever before.

We will wait and see with interest…