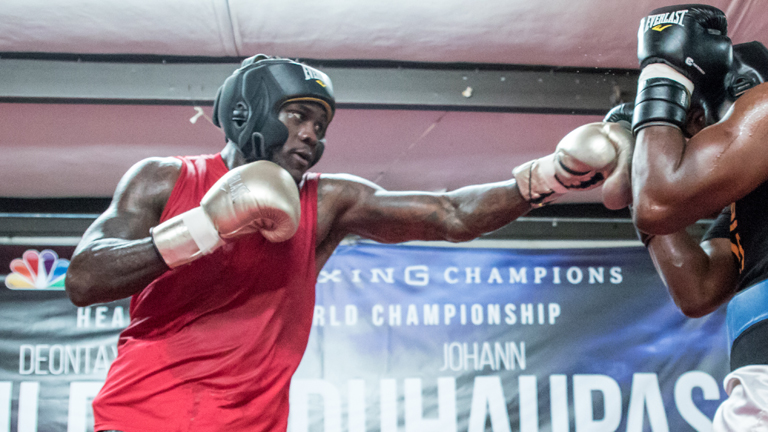 DEONTAY WILDER has revealed he never studies his opponents before he fights them as he prepares to defend his WBC world heavyweight title against Chris Arreola on Saturday.

The unbeaten American will make the fourth defence of his title when he takes on Arreola at the Legacy Arena in Birmingham, Alabama.

However rather than watch tapes of his future foes, as most top-level fighters or their teams do, Wilder prefers to walk into the unknown on fight night.

“I never look at films of opponents because I want to be surprised and I want to give myself a mental challenge in there. That’s what makes this sport so great,” he said.

“I never look past anybody. But I can look through them. Before I became a champion, I said I wanted to be an active champion. Just like I was active coming up. This has been my longest time away from the ring, so if all goes well on Saturday, I want to be back in the next few months.

“I have an ability to get out of bed and fight. I can do things that regular fighters can’t do. I don’t do miles of roadwork. I’m blessed with stamina.”

The sculpted 30-year-old has stopped or knocked out all but one of his 36 victims, Bermane Stiverne being the only man to hear the final bell against Wilder.

Arreola has already lost two attempts at world honours, having been turned back by Stiverne and Vitali Klitschko. The portly Californian has an exciting style though, and Wilder is looking forward to the challenge.

“When it comes to Deontay Wilder, people look for the knockouts and I deliver. What separates me from other heavyweights is the fashion in which I knock guys out. I don’t just knock you out, I really put you out,” he said.

“Arreola definitely has a style prone to a knockout. He’s a pressure fighter who will come forward all night. That plays to my style. I love pressure fighters who give me a challenge. They keep me moving and thinking. I love the sweet science and the art to it.

“I’m here to defend my title against a very hungry fighter. It’s a life-changing event for the man who holds the belt at the end of the night.”