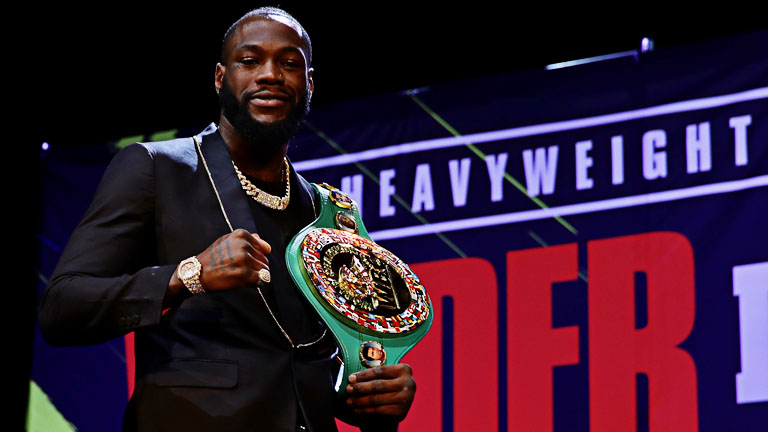 After parting company with Ben Davison, Fury has teamed up with Sugar Hill Steward to prepare for the eagerly-awaited rematch at the MGM Grand Garden Arena on February 22.

The Briton has also bulked up in preparation to meet the 6ft 7in American again, their last contest during December 2018 ending in a controversial split draw – with Fury having twice hauled himself off the canvas.

Wilder, 34, believes making so many sweeping changes proves Fury knows deep down he has to raise his fight game to another level for their rematch.

“I just think it is nervous energy from the first fight. He can go on and say he beat me by a wide margin, but he honestly does not believe that,” the American said. “That is why he wants to change up a lot of things, because if he did really believe that, he would not change up so much.

“He would not have changed up from where he trained at, to his trainers, now he is putting his hands in gasoline to try to make them harder. He brought so many people into his camp, there is so much to keep up with all the changes.

“Next he will be going to see a spiritual adviser to ease his mind for what is about to happen to him in his body.

“As fighters, we must do the things we feel which are going to give us confidence. I don’t think his confidence is that high with me because of the state of being I left him in. I gave this man a concussion.”

Wilder added: “When you knock someone out and give them a concussion, you never forget that – and when you go back in the ring with the person who did it again, that has to be stressful. You can’t sleep at night.”

Fury had battled to a unanimous points victory over Swede Otto Wallin during September 2018, but suffered a deep cut to his right eye during the third round. Wilder feels that contest should have been stopped and the Briton was “saved” because of their scheduled showdown. The ‘Bronze Bomber’ fully intends to open up Fury’s old wounds when they go head to head in Las Vegas.

“I am definitely looking forward to cutting that eye open again,” Wilder said during a conference call on Tuesday.

“And once it is open, when blood is all in his face – I might get a little bit on me as well, but that is alright, I will embrace it – and then we will see if they are going to keep the fight on because I am already dangerous as is.

“When that eye gets cut open again and he gets blood in his face, then that is going to be up to the doctors and other people to take the protocols for that – because I am coming in for the kill.

“You already know my mannerisms and what I do – I don’t come to play around at all, especially with this fight right here. This is everything to me.

“The Gypsy King is going to get floored – and this time around, he is definitely not getting up.”

Wilder insists his full focus is on Fury – and dismissed suggestions of an imminent showdown with Anthony Joshua, who regained the WBA Super, IBF and WBO titles with a points victory in a rematch with Andy Ruiz Jnr at the end of 2019.

“The coward barely got his titles back, never mind step into the ring with the king,” Wilder said.

“He has been out of the picture. Ain’t nobody talking about him no more, so they don’t need to bring him up.

“We are here right now – February 22. It’s all about Deontay Wilder and Tyson Fury. Other than that nobody is in existence at this moment in time.”