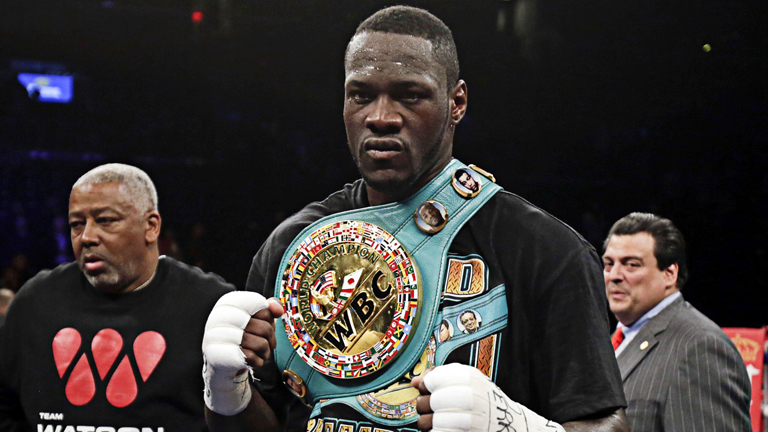 ON Saturday night, Deontay Wilder made the third consecutive voluntary defence of his WBC world heavyweight title when he stopped Poland’s Artur Szpilka in nine rounds.

Prior to that, Wilder had stopped unheralded Eric Molina and Johann Duhaupas to retain the title he won from Bermane Stiverne last January – which remains his biggest win to date.

Since May of last year Russia’s Alexander Povetkin – one of the best heavies on the planet – has been Wilder’s mandatory challenger and the WBC stated Wilder would have to face him after Duhaupas. However some sort of agreement was reached and Szpilka was lined up, gave a better account of himself than expected, before being violently dispatched.

Now it seems Wilder has no choice but to finally fulfill that blasted mandatory obligation.

In the co-feature on Saturday, the IBF title which was so unceremoniously stripped from division No. 1 Tyson Fury was picked up by unbeaten and untested Charles Martin. He was scheduled to fight Vyacheslav Glazkov for the title, but the Ukrainian retired in the third round after suffering a knee injury – though it was ruled a technical knock out.

Either way, the heavyweight crown is splintered further and we have a new pretender to the throne. However the plan looks to be a unification fight with Wilder. Martin-Glazkov was thrown together quickly and it seemed a priority to get it on the same bill as Deontay’s fight with Szpilka.

Both Wilder and Martin are handled by Al Haymon, making a fight between them easy to make, in theory. An American with two world titles to match the WBA and WBO baubles Fury holds would also be enough to convince some that Fury is not the top dog, despite him having beaten The Man.

Importantly, the WBC rules and regulations allow unification fights to take precedence over mandatory obligations – as long as they are “in the best interests of boxing.”

The IBF are also big on unification fights and have made concessions for recent ones to happen, like Gennady Golovkin v David Lemieux last year and the upcoming superfight between Carl Frampton and Scott Quigg in February.

Indeed, Wilder failed to impress against Szpilka – bar the finishing shot – and showed he is still very much a work in progress. His handlers may not want to throw him in there with Povetkin yet and a chance at another world title against Martin, now surely the most sought after heavyweight on the planet, could be their priority.

This is of course speculation and Wilder himself seems intent on proving himself as one of the division’s best – something he cannot prove against the likes of Szpilka.

When Fury confronted him in the ring after the fight, Wilder claimed he would meet the Brit in his “backyard” and called him a “phoney.” Fury has a rematch with Klitschko to get through first – no simple task – and should he get through that, a real unification fight with Wilder would be a colossal event.