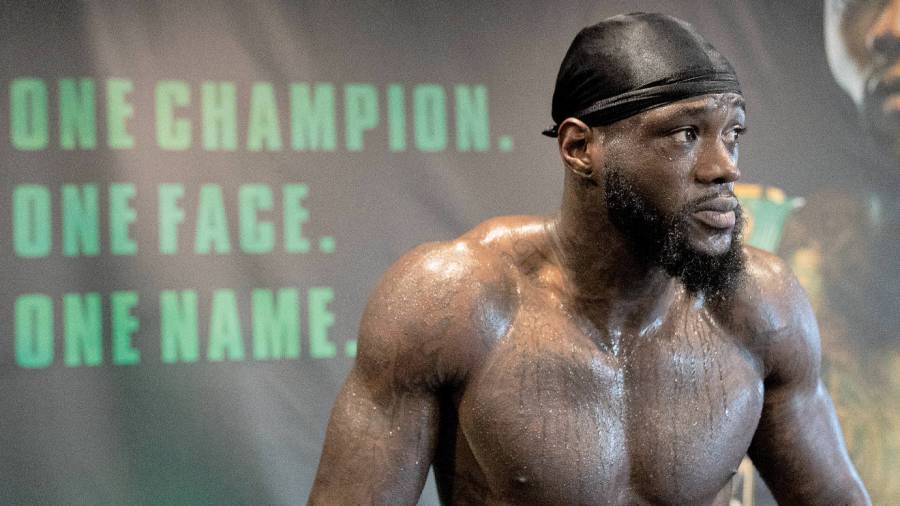 In his media review George Gigney considers a weekend packed full of action, the latest from Deontay Wilder and more

THERE was an overwhelming amount of boxing on at the weekend across various different platforms. DAZN, Channel 5, Fightzone, Sky Sports and BoxNation/FreeSports all aired separate shows across Friday, Saturday and Sunday. While this turned keeping up with all the action into a full-time job over the weekend, it is a ringing endorsement of the health of the sport as we close out 2021. With new Covid-19 variants popping up and worries of further restrictions beginning to spread, it’s heartening to see so many boxers active and plying their trade on broadcasts.

It was also a chance for some exciting British talent to increase their exposure. Isaac Chamberlain looked good in the Channel 5 main event, winning in the first round and then speaking about his world title ambitions.

Sunny Edwards dazzled over in Dubai, with the card available to watch for free in the UK. On DAZN, it was Conor Benn topping the bill, turning in a career-best performance to dismantle Chris Algieri.

Overall, it was an excellent weekend of boxing and there were some small highlights on each broadcast. DAZN released footage of Conor’s father, Nigel, watching on from ringside and reacting to the fight’s ending. The British boxing icon was bursting with pride and literally jumping for joy once the fight was stopped.

There was talk of what Benn will do next, with former multi-weight belt-holder Adrien Broner floated as a potential opponent. While ‘AB’ hasn’t accomplished much in recent years, it would actually be quite smart matchmaking for Benn. Broner still carries name recognition, particularly in the US, and would be a decent scalp to claim at this stage.

Tony Bellew suggested a much more interesting fight, though; David Avanesyan. The European champion might be a step too far for Benn right now, however he’s the sort of fighter Conor will need to face eventually.

Sky Sports were airing the Top Rank show topped by Vasiliy Lomachenko’s dominant win over Richard Commey, though it was heavyweight champion Tyson Fury who stole the show. After serenading Bob Arum with a rendition of Happy Birthday, he then bumped into none other than Oleksandr Usyk at ringside.

The pair exchanged pleasantries and posed for pictures together, giving us a chance to size them up against one another. With talk of Anthony Joshua potentially stepping aside continuing, this meeting was not an insignificant one.

The most wholesome moment of the week came during the final press conference for the Top Rank card, when Nonito Donaire and his opponent Reymart Gaballo shared the stage. Gaballo, who can’t speak English, answered a question and Donaire himself stepped in to translate it into English.

It was a reminder of why we love this sport, and Donaire is one of the finest exponents boxing has had in some time.

TalkSPORT had promoter Eddie Hearn on as a guest for their Fight Night show, and he revealed that there are still complications to resolve for a potential fight between Fury and Dillian Whyte. Apparently, the WBC still needs to decide what the purse split will be if it goes to purse bids. He also explained that purse bids would potentially scupper negotiations that have already taken place.

It’s yet further evidence of boxing’s sanctioning bodies getting in the way of good fights. Perhaps there wouldn’t have been negotiations for this fight without the WBC ordering it, but it’s likely there would have been, given that Whyte has long been one of the leading contenders in the division.

If Joshua and Usyk are going to rematch each other, then Fury-Whyte makes perfect sense. It will be a real shame if the WBC gets in the way of that with more of its nonsensical rulings.

Hearn also revealed that Katie Taylor is now all but set to face Amanda Serrano in April at Madison Square Garden in New York. As Taylor came through her fight at the weekend, Serrano needs to beat Miriam Gutiérrez this weekend and the superfight is pretty much confirmed.

It would be an enormous fight and one that both women deserve. Taylor has proven herself, time and again, the best female fighter on the planet and has turned away all challengers to her throne. Serrano is right up there with her and has even extended her appeal by crossing over into mixed martial arts.

PRIOR to Lomachenko beating Commey, his promoter Arum did the rounds and spoke about potential opponents for the Ukrainian. After telling World Boxing News that he wanted to match him with Shakur Stevenson, he spoke to FightHype about a fight between Lomachenko and current lightweight champion George Kambosos Jnr.

Lomachenko-Stevenson would be interesting, but it pales in comparison to fights with Kambosos and Teófimo López, who beat “Loma” in 2020. The pick would be for Lomachenko to get a crack at Kambosos, with Arum saying they’d happily make that fight in Australia, the champion’s home country.

Deontay Wilder, who has been much more present in public after his recent loss to Tyson Fury than he was after their second fight, appeared on LOL Network with Kevin Hart and discussed the possibility of retiring.

He said: “I have accomplished my goals in this sport. I told my daughter when she was one that I’d be a champion and able to support her beyond belief. I’ve done that. Should I give it a go one more time, or should I just retire and focus on other things?”

Wilder should be enormously proud of the life he’s built for his family through boxing, and no one would begrudge him for walking away now. That being said, if he still has the itch, he can be involved in some really entertaining fights in the heavyweight division.