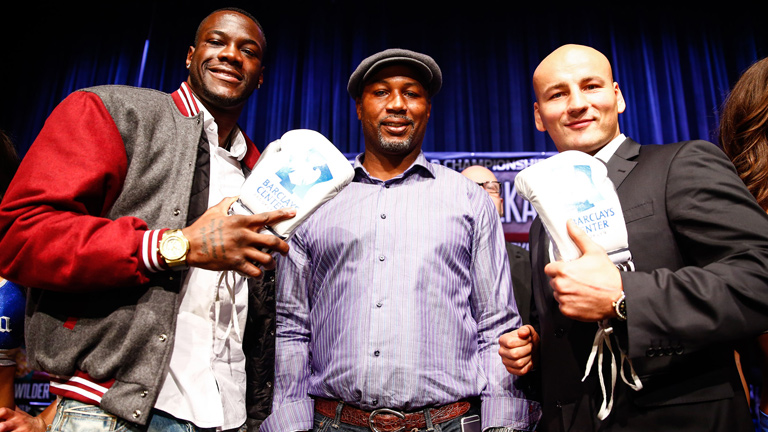 DEONTAY WILDER: I’m so happy to be here in the ‘Big Apple.’ It’s been over 115 years since there’s been a heavyweight title fight in Brooklyn and you’ve invited your ‘country friend’ to end that streak.

Everything has happened at the right time in my life. Even the people I’ve met in my career have come at the right time. I still think about the first time I met Lennox Lewis and he took the time out to talk to me and he showed me different techniques. I’ll never forget.

Lennox was one of those guys that set the standard. He’s a hard act to follow. But I love a challenge. Everybody has had struggles coming up. Now my children are my motivation and that’s what has made me strong physically and mentally.

Here we are in 2016, with a young champion trying to follow in the footsteps of a great champion to become undisputed heavyweight champion of the world.

People who know me know that if I say I’m going to do something, I’m doing it. I am hungry. I am determined. I’m not playing with anybody in 2016. I don’t say things just to sound good. My actions will speak for themselves.

This is a great card. Two heavyweight title fights in one night. It doesn’t get much better than that. The heavyweight division is exciting again. Having someone like me, it’s only going to get better.

I take pride in what I do and what I have. I’m very honoured to have the WBC belt. I even have the belt tattooed on my body. It’s not going anywhere. But there are more belts that I want. It’s going to be a long journey and a tough path to fulfill. But I’m that man.

When people say the heavyweight champion of the world, I want one person to be recognised. I wish my opponent and all future opponents good luck, cause they’re going to need it.

We’re not looking past Artur Szpilka. Things happen due to adrenaline and excitement, but I’m very confident about what I’m going to do on Saturday night. He wants to be the first Polish heavyweight champion of the world. You know he’s coming to make history.

This is going to be a hard fight, but a fun fight. Everyone who sees this fight, they’re going to get their money’s worth. It’s going to be a great show. I cannot wait. Waiting is the hardest part of boxing.