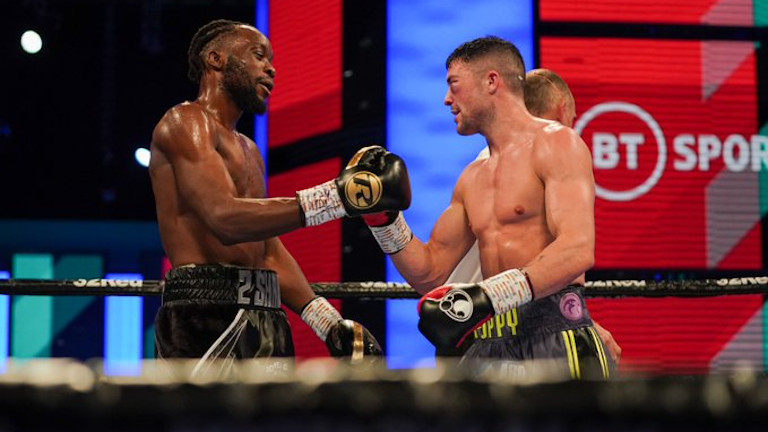 DENZEL BENTLEY seized the vacant British middleweight and settled his score with Mark Heffron with a four round victory at the BT Sport Studios on Friday (November 13).

Oldham’s Heffron had finished the first fight strongly and began this one well. He lunged forward with his right and swung a quick left hook in.

But Bentley had also eliminated the errors he’d been making in their first encounter. He didn’t drift into the corners and allow himself to be pinned down. Instead he held his ground and landed a stern countering right. He forced Heffron to back off and began to line up hard straight one-twos. He slammed that right into Heffron’s left eye. Soon he had a terrible swelling. The eye was closing rapidly and Bentley maintained his dominance with merciless, flush right crosses.

The Londoner knew he was getting through. He saw Heffron retreat to the ropes and set after him, keeping him under pressure.

The eye injury was too bad for Heffron to continue. After four rounds he was stopped on his stool.

Bentley’s delight at becoming British champion was palpable. “It feels good,” he beamed. “He’s a soldier, he’s a tough guy, he didn’t want to come out of that fight. [But] I knew I’d be able to take him out.”

On the undercard Caoimhin Agyarko showed his quality in overcoming a combative Robbie Chapman. His chance to break through came in the seventh round and Caoimhin took it. He stunned Chapman with a monstrous right to the jaw. The Camden man was too tough to lose his footing but Agyarko slung in heavy hooks, too accurate and powerful to let Chapman catch hold of him in a clinch. The referee rightly intervened and stopped the Londoner on his feet.

Tommy Fury, brother of Tyson, after some clumsy initial exchanges, condemned Lithuania’s Genadij Krajevskij to a 0-12 record with a massive right uppercut that deposited him flat on the canvas in the second round.

Henry Turner looks a good prospect. With sharp southpaw combinations he took his six rounder with Des Newton by a 60-54 margin.

Micky Burke directed attacks to the body to soften Tommy Broadbent’s resistance, but thumped him down to his knees with a right over the top. He flew forward with another a solid one-two to end the bout inside two rounds.