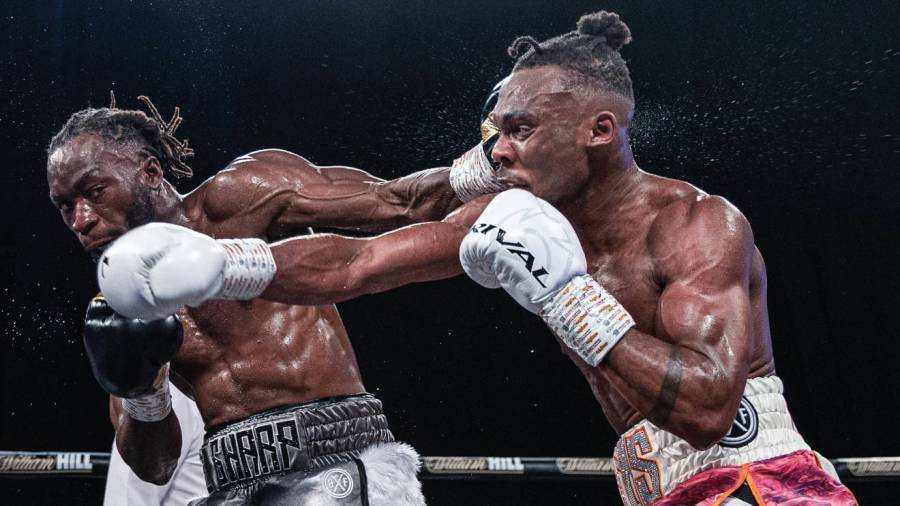 BATTERSEA is more than just a power station and dogs home, it has Denzel Bentley who regained the British middleweight championship in extraordinary fashion. For a man with a penchant for the early night, the 27-year-old kept everyone on the edge of their seats or, in some cases, off them as he reeled in Linus Udofia just a few miles up the Thames at Indigo inside the O2 on Friday, breaking the unbeaten record and heart of his rival with a split decision.

Trailing at halfway to the Luton 28-year-old’s speed and skill, Bentley summoned a will-to-win to match his strength, triumphing 116-112 (Marcus McDonnell) and 115-113 (Mark Bates) with Terry O’Connor marking it 115-114 to Udofia. A tumultuous and pulsating headline act for Wasserman, it saved their Channel 5 debut from potential embarrassment after the 11th-hour collapse of Josh Kelly’s fight.

The contrasting styles were spellbinding. At times, Udofia’s judgement of distance was exquisite, scoring beautifully against the KO specialist and he was not afraid to mix it up close too, with two uppercuts, one from each glove, an early highlight. Bentley was not without success and some sessions were close but it wasn’t until round seven that the tide turned.

It began with a ferocious late assault and it was the same in the eighth as his approach, mixing aggression with accuracy, paid dividends as Udofia was forced to momentarily touch down under a barrage of around a dozen unanswered shots.

Mark Lyson, who otherwise refereed superbly, missed that split-second incident, but the momentum was with Denzel who prowled forward menacingly.

Udofia regained his movement and, seemingly his control when he took the 10th, but Bentley, 10 of whose previous 15 wins had come inside two rounds, came on strong in the last two stanzas to prevail.

The British middleweight title eliminator, sadly for the armchair viewer played out before the live TV transmission, was equally rip-roaring, with a similar pattern. Newquay’s Brad Pauls, aiming to follow in the ringsteps of the legendary Len Harvey, by taking a Lonsdale Belt to Cornwall, put himself in the queue to have a crack by outpointing Ryan Kelly after a 10-round classic.

Pauls made a bright start only for the Birmingham fighter to catch the eye in the second with a variety of shots. But it would be Pauls’ left that would dominate, scoring repeatedly with his jab plus some classy combinations.

Kelly refused to shrink away and found his mark in the eighth with a wicked right upper cut and crunching body hooks with both mitts. It inspired a powerful finale from Ryan in the last two rounds, but it probably came too late with Brad having the earlier quantity and quality. McDonnell refereed.

Harlem Eubank extended his 100 per cent sequence, and in breathtaking fashion, with a second-round KO of Sean Dodd. His execution was delightful. Having eased through the first three minutes of a scheduled 10 rounds, Eubank struck in the second. Cleverly letting Dodd come on to him, Harlem picked his spot and shot, a picture-perfect left hook felling the Birkenhead warrior.

There was class too as he bowed to the prostrate 37-year-old who failed to beat Chas Coakley’s count at 2-24. “Masher” might be in the twilight of a tremendous career, but this was a good scalp for Harlem.

Harvey Horn barely had a glove laid on him by Spain’s Alejandro Torres in six one-sided rounds, the Bethnal Green southpaw controlling with his jab and some stinging bodywork. McEvoy reffed with Bates marking it 60-54.

Epsom’s Dan Morley registered his first stoppage in his eighth straight ‘W’, referee Coakley calling his six-round welter clash with Spain’s Ivan Njegac off at 2-29 of the fourth.

Plymouth-based Moldovan, Constantin Ursu, put Borja López down with left hooks to the body in rounds one and three, but the Spaniard made it bravely to the end where he lost 40-34 on Coakley’s card, McEvoy the thirdman.

The Verdict Both middleweight contests were top-drawer affairs and each losing party would be worthy of another shot at the winners.

FIGHTS falling through are not uncommon, though not usually immediately before the combatants are due to climb through the ropes. That was the case at Indigo at the O2 on Friday night when Josh Kelly’s scheduled return against Xhuljo Vrenozi was pulled at the last minute. His first bout back since his defeat to David Avanesyan for the European title in February 2021 will now be in Liverpool on June 17.

Kelly apologised to the crowd. “He won’t come out of his hotel room,” the 28-year-old told the audience. “I was warming up in the changing rooms and he’s pulled out. The support I’ve got tonight is unbelievable. Everyone’s tickets tonight will be valid for the Liverpool show on June 17.”

TV pundit Steve Bunce added that no amount of coaxing would entice the Italian-based Albanian out. Kelly came in at 156lb 9oz, just over two pounds above the weight limit, with his opponent tipping the scales at 151lb 12oz.

The Sunderland super-welter, of course, should have made the stipulated weight but, unless a title is on the line, it is rare it leads to a fight collapsing. Sometimes there is simply a resigned shrug from the lighter party or an offer of financial compensation. And that appears to have been a factor here, as promoter Kalle Sauerland discussed on Channel 5.

“Josh came in 1.2kilos overweight yesterday,” he said. “They knew he was going to come in around that weight. There was no approaches for Josh to go and make the weight with 1.2kilos not a big ask. We shook hands, it’s on camera. Then this afternoon they said we’re not boxing.
“So, we thought okay is it a money thing? So, we tested the water there. In fact, we tested it very heavily. Clearly wasn’t a money thing. In my view he’s just bottled it to put it bluntly.”