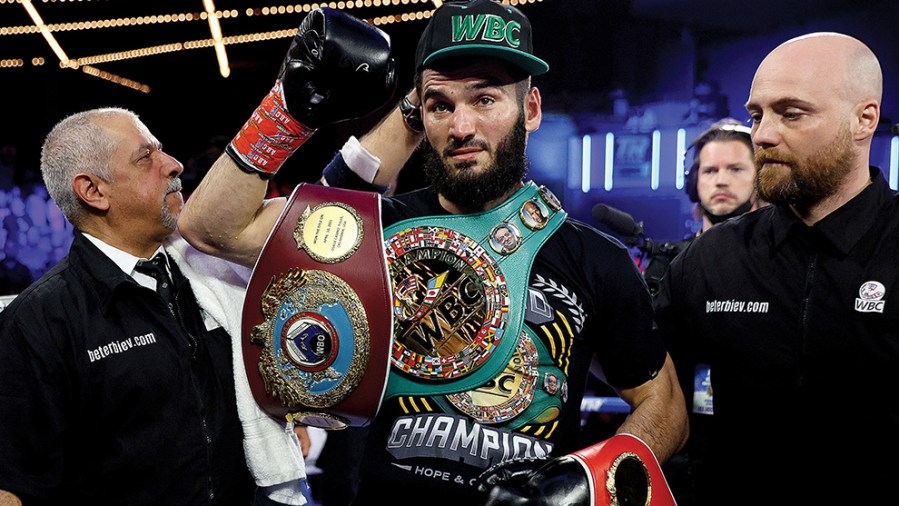 AFTER completely outclassing Joe Smith Jnr in two rounds, the masses have called for Artur Beterbiev to box Dmitry Bivol next on the premise that they are the two best light-heavyweights in the world. While that is certainly a more appealing match than Beterbiev’s proposed encounter with Anthony Yarde, which is scheduled to take place this October, is there anyone out there who would fancy Bivol’s chances? Based on how Beterbiev toyed with Smith before cruelly dispatching him, my answer would have to be a resounding no. Besides, Beterbiev is promoted by Top Rank, Bivol by Matchroom. Oil and water would nearly cooperate with the other as well as those entities, so do not expect the two Russians to square off at least for the foreseeable future.

Yarde, who was ringside, was effusive in his praise of Beterbiev, but also said he has what it takes to beat him. While Yarde could not be expected to say anything else, certainly any confidence he has cannot have come from what he witnessed at Madison Square Garden.

Few fancied Smith’s chances going in, but he was labeled a live underdog. Beterbiev, it was thought, would grind down a brave Smith somewhere in the middle rounds but would know he was in a fight. It is a testament to Beterbiev’s supreme ability that he could outclass Smith as easily as he did.

Perhaps the signs were there a couple of days earlier at the press conference. Beterbiev was polite, but seemed bored. Smith, who has had no hesitancy with verbally mixing it up with opponents in the past, seemed extra respectful of the Canadian-based world champion. For the Long Islander, just the fact that he was having such a big fight in his hometown at MSG’s Hulu Theater, was a victory in itself. It showed how far he had come in exceeding most people’s expectations. But, of course, dreams only last so long and Smith’s was all but dashed in the first round.

Smith came out fast at the opening bell. Beterbiev moved and boxed, sizing up his opponent, fighting only in spurts, seeing what Smith had to offer. It certainly was not much in the form of defence as a still cautious Beterbiev quickly saw how hittable his opponent was. Smith was wild, his technique at times barbarian, or at least when compared to his opponent. During a brief exchange Smith went down, but it was ruled a slip. When a subsequent right forced Smith to go down just before the bell his confidence took a big hit as well. His body language was poor as he went back to the corner.

Beterbiev was up off his stool well before the second round began. This was not bravado on his part. The feeling out process was over. Beterbiev was not looking to go rounds.

Beterbiev dropped Smith with another right. Smith got up, looking more discouraged than before. Not only was Smith unable to hit Beterbiev, but his own punch resistance had abandoned him.

A flurry by the ropes dropped Smith for a third time in the fight. He was more outclassed than physically hurt until the last salvo of blows. Smith got to his feet, but hooks and uppercuts had him floundering. Referee Harvey Dock stopped it at 2-19 of the round after Smith turned around with his back to Beterbiev to avoid the onslaught.

For the record Beterbiev successfully defended his WBA and WBC titles and won Smith’s WBO belt.

Two-time Cuban Olympic gold medalist Robeisy Ramirez scored the biggest victory of his professional career, stopping Albany’s Abraham Nova at 2-20 of the fifth round of a scheduled 10. The undefeated Nova was in terrific physical condition, but Ramirez forced him to box at a much faster pace than he anticipated. It was a back and forth battle for the first four rounds with each having good moments, but Ramirez was slowly closing the distance between them.

It was still anybody’s fight when, in the fifth round, southpaw Ramirez backed Nova into a corner, throwing a looping right that missed. He followed with a straight left which landed flush. Nova crashed to the canvas partly under the lower strand of ropes. There was no need to count and referee Charlie Fitch didn’t, immediately waving it off as the medics rushed the ring.

Reading, England’s Asinia Byfield dropped a unanimous eight round decision to Long Island’s Wendy Toussaint which was scored 79-73 across the board. Byfield was more competitive than those scores would indicate. There were shifts in momentum as both took turns being the aggressor. Byfield tried to dart in and out with flurries using his speed, but Toussaint was slightly crisper throughout and finished stronger.

Brooklyn prospect Bruce Carrington, who is being carefully groomed by Top Rank, won his fourth in as many outings when he forced Cuban Adrian Leyva to retire on his stool at the end of the fifth round of their scheduled six.

Carrington hurt Leyva in the third round with rights to the chin and a left to the body. From there it was all downhill for Leyva before he was pulled out.

A spirited six-rounder opened the bill between Schenectedy’s Jahyae Brown and Dublin’s Keanu McMahon. Brown outworked McMahon over the first four rounds. McMahon came on somewhat in the last two, unleashing some hard body blows. At the end Brown was awarded the unanimous decision by scores of 60-54, and 58-56 twice.

THE VERDICT: Politicking may stand in the way of the Beterbiev-Bivol – the only fight that now matters at 175.

Madison Square Garden’s big arena became available when the New York Rangers were eliminated from the NHL playoffs, but the feeling was the show was not quite big enough to move it there. The Hulu Theater looked packed with an announced attendance of a little over 4,500, but tickets were still available on fight night.

A 10 count was given for former champion Carlos Ortiz who passed away earlier in the week.

Major construction is taking place in and around Madison Square Garden, making it harder to get around the famed arena.