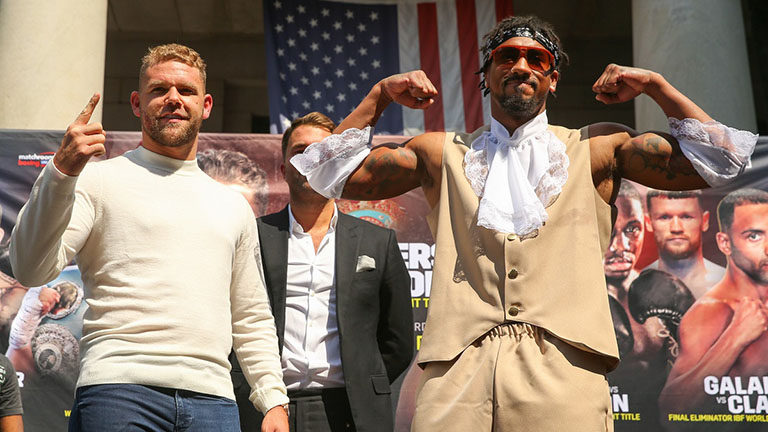 'There's a lot of smoke and mist in the division right now, and when it clears up I will be the man standing there,' says WBO champion Billy Joe Saunders

At their announcement press conference Friday in Boston Andrade declared, “Billy Joe is a great fighter, an undefeated southpaw, he’s ugly looking, but he can fight – but your boy Demetrius Andrade always come through. Never have I failed to come out with the victory.

“It’s going to be an entertaining build up and I’m thrilled to be working with Eddie Hearn, he’s bringing boxing at the highest level out here – there’s no sport like boxing, and we’re showcasing it in Boston.

“We’re going to be in shape to do 12 rounds, I know I have the bigger dog inside me than Billy Joe, and I’m going to unleash that on him on October 20.”

The Gennady Golovkin versus Canelo Alvarez rematch is the big fight in the middleweight division. Saunders wants to unify world titles and knows he can’t afford to lose his WBO belt. “There’s too much at stake in this fight to even think about losing – and I will prove that I am number one. If I turn up at my 100 per cent best, it’s good enough to beat him. He’s a great fighter and he’s been avoided, our paths have crossed and we have to fight,” Saunders said.

“All jokes and trash talk aside, this is going to be a really good fight. Does anyone want to fight Demetrius? No. Does anyone want to fight me? No. We have to fight each other to prove who the number one guy is. Technically, we are the best two in the division, and the winner is going to be number one. I’m world champion, I’ve been more active, I’ve boxed the better opposition – but I have to beat this man.

“There’s a lot of smoke and mist in the division right now, and when it clears up I will be the man standing there.”