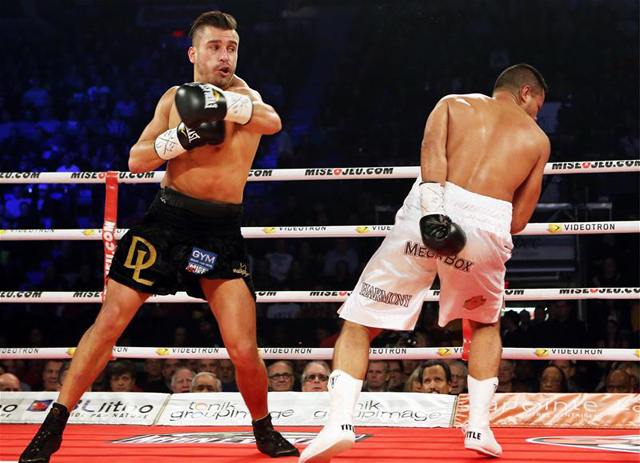 CANADIAN middleweight David Lemieux began his career by stopping his first twenty opponents in less than five rounds. To date, ninety-one percent of the former IBF World champion’s thirty-five victories have come by way of knockout.

He has also been knocked out twice himself. In 2011, his then-trainer Russ Anber threw in the towel in the seventh round as veteran Marco Antonio Rubio battered Lemieux from post to post to post. Four and a half years later, he was systematically broken down by Gennady Golovkin for twenty-two straight minutes, until referee Steve Willis had seen enough and saved Lemieux from additional punishment.

Logging experiences on both sides of the equation, it’s safe to say that Lemieux knows a thing or two about the hurting business. He is, arguably, one of the hardest punchers in and around his weight class and he relishes that notion.

“In the ring, I become a robot,” he said. “I am no longer human. I have to destroy what is in front of me. There are no hard feelings if I hurt my opponent. If I have trained to do it on a punching bag, I will do it to the human in front of me in the ring.”

On Saturday night, the Montreal native returns in front of his hometown fans against Argentine Cristian Fabian Rios, an eight-year veteran with a paltry 19% knockout ratio. On paper, the obscure foe poses no real threat to Lemieux’s title aspirations.

“My fight against Glenn Tapia was an important step after the Golovkin fight to get back on track,” said Lemieux. “Now, Rios is another step to get back on the road to becoming a world champion – to win and to be impressive.

“I’ve been preparing very well, and we are taking him very seriously. We are expecting the best Rios that we can get. We are not taking him lightly. We are doing everything we need to do to make sure there are no surprises.”

Lemieux has been rumored to be on Canelo’s 2017 short-list. Saturday’s fight is obviously a showcase fight to keep the ex- champ’s wheels greased.

Earlier in the year, Rios’ countryman, David Emanuel Peralta, flew to the North American continent to fight Robert Guerrero in a fight that was supposed to be a tune-up for the Mexican-American two-division champion.

The chips landed awkwardly in that gamble, when Guerrero suffered a shock defeat against a guy that was, literally, driving a taxi-cab seven weeks prior.

Could Lemieux suffer a similar fate against Rios? Sure, but he likely won’t.

Rios has never been stopped in his career but it’s hard to see him keeping Lemieux at a safe distance for ten rounds.

While the promotion will like you to believe that “fans can expect explosions on October 22, especially if Rios brings it all,” the likely outcome is that the thirty-three-year-old Rios gets blasted back into middleweight irrelevance and Lemieux logs knockout thirty-three.

For the record, that’s one  shy of Canelo’s KO aggregate but compiled in twelve fewer fights. The press release for Canelo-Lemieux almost writes itself.

A fight between two young, hard-hitting, middleweights sounds entertaining enough but, if it gets force-fed to the boxing public next year, it won’t help but come off as a measuring stick against which to gauge how Alvarez will fare against Gennady Golovkin.

The old “sure, you knocked him out in the seventh round, but look what I did” maneuver doesn’t apply in the sport of boxing but it helps sell tickets and pay-per-views to the casual fans of the sport. Surely the thought crossed Oscar De La Hoya’s mind.

Both Lemieux and Alvarez are represented by De La Hoya’s outfit, Golden Boy Promotions, so the bout should be easy enough to make. But all the fanfare and ballyhoo surrounding the event won’t be enough to detract from one simple fact – it absolutely will not be the middleweight fight that the fans want to see.