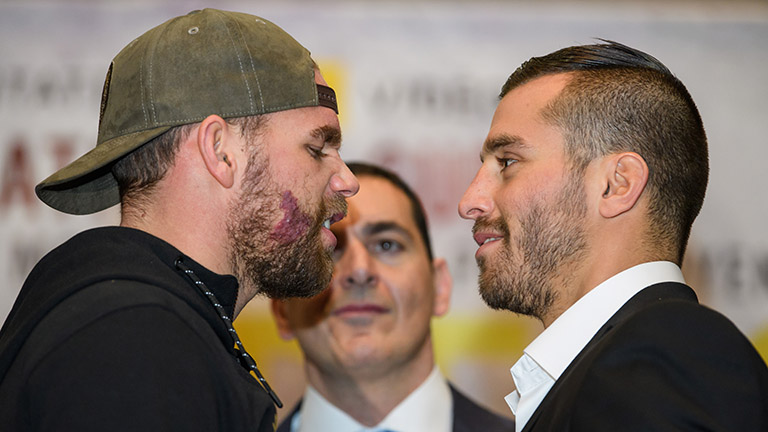 'How did I do that?' Billy Joe Saunders reflects on his career before David Lemieux world title fight

WBO middleweight champion Billy Joe Saunders went head to head with challenger David Lemieux at the final press conference ahead of their clash on Saturday (December 16).

Saunders is certain he’s better than ever. “I’ve been in the ring 25 times now, and in a lot of those fights, I’ve been the underdog, bigtime. And in those fights, I was outboxed 60 per cent of the time. When you don’t love boxing and you’re still winning, and you look back and wonder, ‘How did I do that? How did I get through that?’ But when you do find a love for it, and you have good people working around you, people who make you happy – there’s a saying, a happy fighter is a thankful fighter. And I haven’t been this happy since my amateur days. For the last six or seven months, I’ve never been happier. I’m excited to get into the ring. I’m excited to get into the ring and eager to put on a classic display. Because not only am I mixing it with a boxer who is in the top five, but I’ll be fighting in front of great fighters I’ve watched as a kid, like Bernard Hopkins and Oscar De La Hoya,” Saunders said.

“David has to come from round one and try to knock me out. Because when he’s eating fresh air, he’s very injury prone. But what I don’t want from David’s team are excuses. David is a good fighter, he’s mixed it with [Gennady] Golovkin at a very elite level. But some boxers are not quite enough to be at that elite level. And David, you’re not quite good enough. Am I good enough? We’ll soon see. In my own mind, I know I can deal with it, and then with Golovkin or Canelo, we’ll see where I really am.”

Lemieux hit back. “The time to talk is over and now it’s time to let the fists do the talking and show you who the real world champion is. A lot of things are going to happen on Saturday, but my promise to you is that by the time I will leave Place Bell, I will have the WBO belt on me. I will be world champion. I’m ready to give you guys a great evening of boxing. Saunders made a lot of promises, about his chin, about his purse, and that’s something I haven’t forgotten,” he said.

“Let’s see for how long you will be able to back up those words and put them together again this Saturday. I’m well aware of your abilities, I hope you are aware of mine. I’m not just a puncher. People like to see blood and big punches, and that’s what they’ll see on Saturday.”