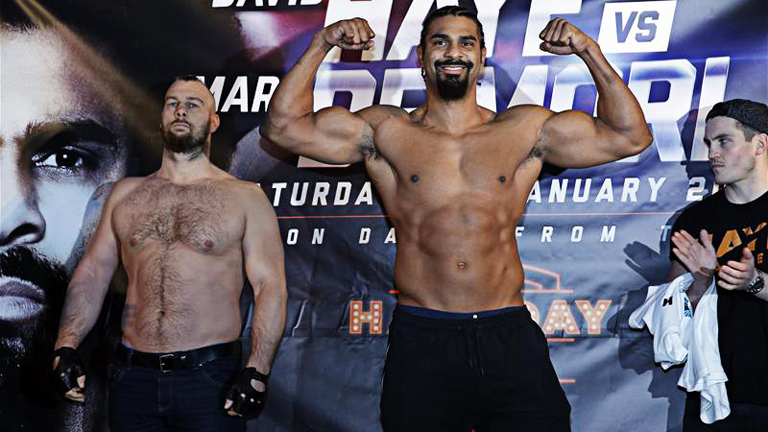 Looking typically sculpted but noticeably larger than before, the former two-weight world champion ends a three-and-a-half year hiatus tomorrow night at the O2 Arena in London.

De Mori, fleshy at 243lbs (17st 5lbs 8oz), donned black leather gloves as he took to the scales but looked relaxed and focused.

Haye, who has sported an Afro throughout the build up to this fight but is now back to his trademark cornrows, last fought in July 2012 when he stopped Dereck Chisora inside five rounds.

The Londoner weighed in at 210lbs for that fight, meaning he has packed on 17lbs in the interim – and most of it looks to have been muscle.

Haye explained that a change in diet is the reason behind the weight gain. He now eats roughly five times a day to minimise the risk of injuries. Under former trainer Adam Booth, he used to stay as close to the cruiserweight limit as possible while operating in the banner division.

With the help of nutritionists Aidan Goggins and Glen Matten, Haye’s diet was overhauled to complement his training under Shane McGuigan.

Prior to today, Haye’s heaviest official weight was the 222lbs he scaled in 2010 before defending his heavyweight title against John Ruiz – whom he stopped in nine rounds.

Their fight has been promoted to chief support on the bill after two other fights fell through. Former featherweight world champion Billy Dib was forced to withdraw from his fight, and the scheduled English welterweight title eliminator between John O’Donnell and Shayne Singleton has also been scrapped.