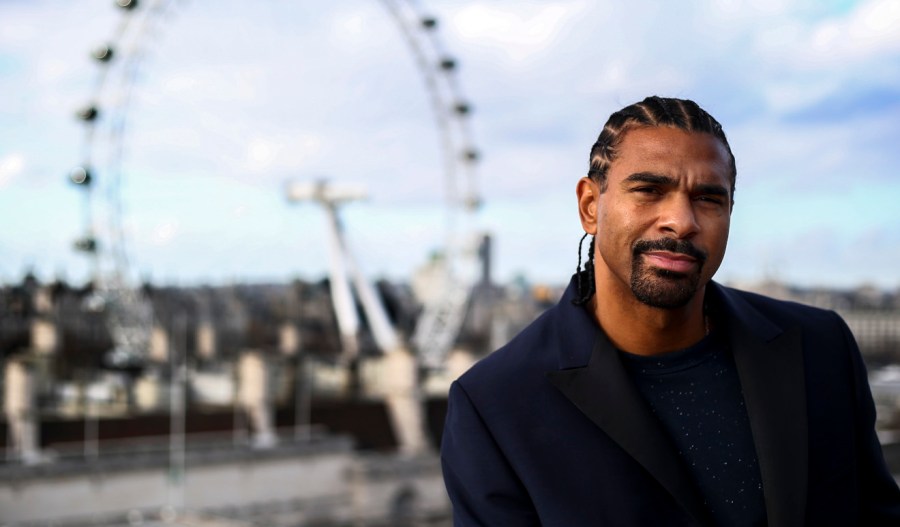 DAVID HAYE is coming back, but not making a comeback, when he takes on his long-time good friend, the allegedly filthy rich Joe Fournier, in an eight-rounder on September 11 at the Staples Center in Los Angeles.

The meeting will be on the undercard of 48-year-old Oscar De La Hoya versus war-torn mixed martial artist Vitor Belfort, 44. It will be part of a Triller pay-per-view, the streaming platform that brought you Mike Tyson vs Roy Jones Jnr with a clear conscience last year. The California State Athletic Commission will sanction both encounters as professional boxing matches.

Haye, 40, has not fought since May 2018, when he lost for the second time to Tony Bellew. That outing told Haye his body could no longer compete at the top level and he announced his retirement thereafter. He has counted out fighting again ever since.

That all changed a fortnight ago when, over dinner on the Greek island of Mykonos, both he and Fournier were asked by friends who would win a fight between them. “I laughed,” Haye states. “But out of respect for Joe’s ego I suggested it would be close, maybe a draw, whilst winking at Joe.

“Joe’s straight-faced response was very different, he was deadly serious stating he would win a fight today – I assumed it was just the tequila talking.

“And that’s exactly where it started. A boozy night in Mykonos, two alpha-males peacocking with a crowd of girls. Fast forward two weeks, I remain happily retired from boxing, with no intentions to make a traditional comeback to challenge the monsters of the division, but I am fit and ready to prove my point against my over-confident billionaire buddy.”

Londoner Fournier, a former basketball player, made headlines in boxing circles in late 2017 when it emerged that the World Boxing Association had somehow placed him at No.11 in their light-heavyweight rankings. That was bad enough. Worse, far worse, was the fact he was fighting – albeit against woeful opposition – in the Dominican Republic after being suspended for failing a drug test following a bout in Belgium. In all, he had four fights while under a NADO suspension (that culminated, after an appeal, in 2018). The WBA were informed of his suspension but ranked him regardless.

Fournier, whose 9-0 record was forged against opponents with accumulative stats of 29-116-1, returned to action in April, weighing 187lbs, when he halted debutant Andres Londono in Atlanta.

Haye, who weighed 220lbs for the Bellew rematch, went on to explain that although he would have been happy to prove his point by kindly beating up his mate in a behind-closed-doors sparring session, a huge sum of cash was offered to turn the drunken peacocking into a licenced prize-fight.

“Joe asked what it would cost to get me through the ropes one last time for an official fight, on a real stage,” Haye continues. “I told him it would have to be a package rivalling my last PPV blockbusters. A few calls with the lawyers, and here we are.

“Streaming powerhouse platform, Triller, loved the idea of such a spectacle and presented me with an offer I simply could not turn down. An opportunity to prove a point to a friend, earning true pay-per-view money, whilst doing what I have always loved, simultaneously giving fans one last evening of nostalgia – who in their right mind would ever turn that opportunity down?”

Indeed; nobody should blame Haye, or Fournier, for taking the money on offer. The storyline will undoubtedly appeal to plenty of fans. Certain media outlets will be all over it. Alongside the comeback of De La Hoya, it’s not hard to envision this event generating significant interest. Particularly from a sport devoting as much time to pantomime-style rivalries, all with the potential for the grisliest of endings, as it does to making meaningful, well-matched fights.

For the hardcore fan, eager to see those meaningful contests, it’s yet another reminder that professional boxing is in danger of descending into a free-for-all for the rich, the famous and the worn-out. A contest between two good friends, hatched while high on tequila as recently as two weeks ago, should surely not be a contest at all. At best, it’s a well-orchestrated cash-grab. At its worst, it’s a grotesque mismatch.

But anyone with that viewpoint is not the target audience here, after all. Boxing has allowed itself to be exploited by platforms like Triller who recognise, quite rightly, that in the absence of any real structured competition to attract the masses, or indeed any commissions to stop them, short-term heists like this are just the ticket.

Haye, ever the salesman, undoubtedly recognises this has no place in the world of competitive boxing even if those who should know better – commissions, promoters, broadcasters and the media – will attempt to position it as such.

“This fight is the ultimate battle of egos, the outcome of some drunken bar banter,” Haye declares. “Now I have to teach some manners to a dear but delusional friend of mine, Joe Fournier.

“Whilst an unexpected challenge, since retirement I have remained in the gym and I am always mindful of what I put in my body meaning with just four weeks’ notice, I am currently 10lbs lighter than my first fight against Tony Bellew some four years ago. I’m looking forward to lacing up some 10oz gloves and ring walking at LA’s Staples Centre to Ain’t No Stoppin Us Now to give a friend a brutal education in boxing.

“This is not a comeback, this is about teaching Joe Fournier there are levels to the boxing game. One must stay in their lane or risk getting flattened.”

Professional boxing strays ever further from its lane, nonetheless.