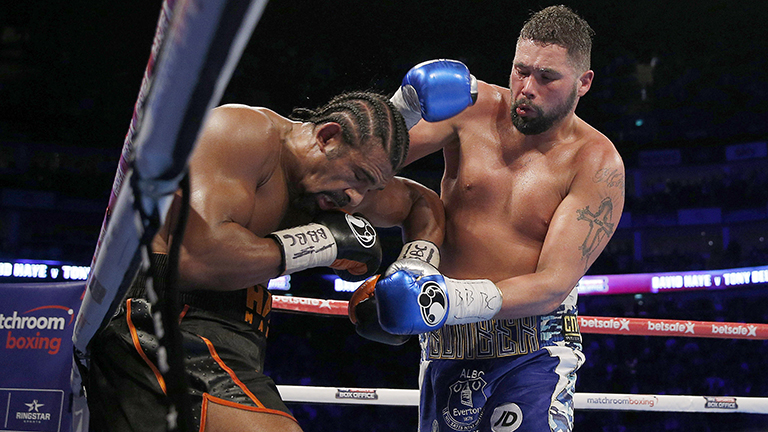 DAVID HAYE has called on Tony Bellew not to retire so they can meet for a second time in a repeat of their heavyweight contest after the first bout ended with a stoppage in favour of the Liverpool fighter.

Haye, who suffered a torn Achilles and was forced out of the O2 Arena fight when his corner threw in the towel in the 11th round, believes he will be back in action in six to nine months.

And the 36-year-old has called on WBC cruiserweight champion Bellew, who stepped up to heavyweight for the contest, to put all thoughts of retirement out of his mind and agree to a rematch.

Bellew talked of retirement in the days after the fight, but Haye said: “I believe after sharing the ring with him he would want to do it again.”

Haye, who was left largely immobile by his injury and suffered knock-downs in the sixth and 11th rounds, added on Sky Sports News HQ: “If Tony Bellew does retire – which I truly hope he does not – but if he was to retire I would carry on my path. I would just find a way to challenge for the (world) heavyweight title. Maybe he is thinking, ‘I have got that done it’s time to retire at the top’.”

Haye underwent a two-and-a-half hour operation to reattach his right Achilles, repairing damage which left him hardly able to stand and saw him fall to the canvas on numerous occasions during the defeat to Bellew.

He said the operation was the same one the likes of David Beckham and basketball star Kobe Bryant have undergone, with the pair both recovering to carry on in their chosen sports. He reported too there was good news from his surgeons.

“They are saying it went well,” he added. “Big athletes had the same operation and came back so I don’t see why I will be any different. Other athletes have come back six to nine months after this injury.”

Haye also described the moment he realised something was wrong after suffering the injury during the fight, saying: “It felt like my leg went into a bear trap. I looked down at my foot and I couldn’t control it.”