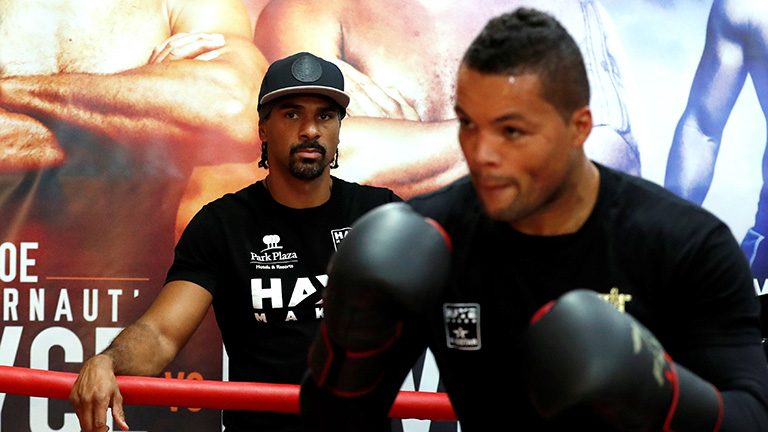 DAVID HAYE promotes Joe Joyce and trains with the same coach, Ismael Salas. But he will never spar with the Olympic silver medallist.

“He got a very, very good learning fight in his first professional fight [against Ian Lewison]. He’s shown 30 to 40% of what he can do, compared to what I’ve seen in sparring. So I’m very, very positive about his future,” Haye added. “Exactly the fight I wanted. I couldn’t have scripted it any better. What I didn’t want was him to fight someone, he hits them on the chin and they fall over. Because that just gives him a false sense of security about his power.

“Because in the heavyweight division, fighters even at domestic level, guys like [Dereck] Chisora, they’ve got granite chins, you can’t just expect to go out, hit them with one shot and knock them out. [Lewison] had 11 weeks notice. I wanted to make sure Ian was in shape to go 10 rounds and he was clearly. He’s not the most body beautiful fighter but he’s shown he’s got bags of heart and he’s there for 10 rounds if you allow him to.”

Haye also insisted he is already in good condition for his December 17 rematch with Tony Bellew. “I’m in good form, you’ll get a much more entertaining fight,” he said. “I am, much better than many people anticipate. But the proof of the pudding is in the eating. I feel good, I’ve been training hard. I had an operation on the Sunday, the Monday I was back in training. I haven’t stopped training the whole time. I’m in great condition now. I could fight tomorrow. I’m 12 round fit now. It’s a good place to be eight weeks out from a fight.”