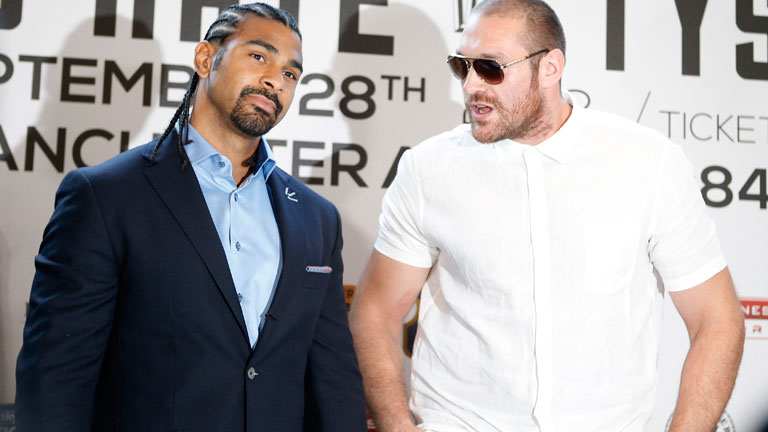 DAVID HAYE knows the styles of Tyson Fury and Deontay Wilder better than most.

The former world cruiserweight and WBA heavyweight champion sparred Wilder twice, the first time in 2011, and again while he was preparing to take on Tyson Fury in September 2013. Haye was forced to postpone the all-British showdown when he cut his eye in sparring and, two months later, the fight was cancelled altogether when he suffered the shoulder injury that kept him out of the ring until 2016.

Haye vividly remembers preparing for Fury and, in a conversation with Boxing News in Las Vegas, he detailed the key elements he was working on to defeat the 6ft 9ins giant.

“To do that you have to have a staccato, unorthodox rhythm in a similar way that Wilder can do on occasion – when he’s feinting, when he’s a bit awkward, it’s hard to set up any kind of attack when you’re facing someone like that.

Haye, then trained by Adam Booth, studied Fury carefully and believes that Wilder, after going 12 taxing rounds with Tyson in December 2018, goes into Saturday’s rematch with a far better education than he had the first time.

“It’s like a game of chess, you have to play a game where you’re always looking two or three punches into the future,” Haye stresses. “It’s not like you’ll just throw a big one-two and you’ll hit him, it’s hard to do that, so you need to strategise.

“It’s something that I think Wilder understands now – he didn’t get it the first time. You can’t just hit him like that, you have to set it up. Very rarely can you hit him with one shot. You’re going to be made to miss, you’re going to be made to look a fool. When you look a fool, it takes you further away from being able to set things up because you’re angry and you’re trying to land harder punches – and that’s part of the Tyson Fury strategy, to get into your head and make his opponents try to knock him out. But when you try to knock Tyson Fury out, it doesn’t work. To have success, don’t look to knock him out with the first wave of punches, they’re just there to set up the second wave, which is when you might start to land.”

Fury reacted angrily to Haye withdrawing from the fights, blaming him for a significant loss of eaernings while accusing him of running scared. The relationship between the pair didn’t get any smoother when Haye picked against Fury before he dethroned Wladimir Klitschko in 2015.

Yet Haye, who retired in 2018, has been a fan of Wilder since he experienced the American’s skills and power for the first time nine years ago. Haye sees similarities, namely their unorthodox styles, in Wilder and Fury.

“If I was training to beat Deontay Wilder, being the significantly shorter fighter, I’d have to use raining tactics and get his respect early,” Haye says. “I’d have to land something big to really get that respect so he knows he can’t walk just walk in. So every time I feint, he reacts. Because if he doesn’t react to a feint, it means he doesn’t respect you and he will walk you down. So you have to nail him pretty hard, very quickly, to put him where you need him, to draw him into a ‘feinty’ shootout.

“Tyson Fury did that tremendously in the first fight. He was throwing double and triple jabs, he was nice and loose. When you stiffen up against Wilder, he seems to have good effect. When you’re loose and you work with him, you’ve got more of a chance.

“You have to feint a lot if you want to land something. Like Fury, he’s hard to catch with the first wave of shots. You can tell he’s played a lot of basketball, he’s got such long arms, good reflexes and timing, that he doesn’t need to put his hands up to block, he can just move his head out of the way.”

Fury will need to move his head out of the way, too. Particularly when one considers he was badly cut during his tougher than expected 12-round victory over Otto Wallin as recently as September. Haye endured several cuts during his career and believes this could become a huge advantage for the WBC heavyweight champion at the weekend.

“The cut could be a massive factor,” Haye opines. “Fury can’t afford to go back to his corner after round two and the cut is open. Because if it’s open, he can no longer see out of that eye or the vision has gone from 100 per cent, down to 10 or 15 per cent. That’s an enormous disadvantage against Deontay Wilder, who can be devastating with any shot. Fury cannot allow that to happen. It’s hard enough trying to beat Wilder with two eyes that are 100 per cent, it’s very difficult to see the shots coming even then. Fury was nearly knocked out twice from big shots. If he is blind in one eye, that means he won’t see the shots coming, and the shots you don’t see coming, are the ones that you knock you out; you can’t brace for them, you can’t ride them, you don’t know they’re coming.

“I don’t think it will play on his mind, though, it’s been a while since it happened. But at the time, it bothered him, he was dabbing at it, he was wiping his eye, it clearly affected him. But he wasn’t fighting Deontay Wilder that night. Then you ask yourself, how would Deontay Wilder have dealt with Otto Wallin? I don’t believe Wallin would have seen round two, to be honest, he’d have walked him into a right hand and knocked him out. That’s the difference between Fury and Wilder: One of them has that equaliser where it doesn’t matter who you are, you’re going to sleep when I touch you. Fury doesn’t have that. He can fight with fast and flashy combinations but he doesn’t have that one-punch KO power. It doesn’t mean he can’t pull off the upset, it doesn’t mean he can’t knock out Wilder. If Wilder walks on to three or four of Fury’s biggest shots, he’s going to hit the deck but I just Wilder’s own punch power being too significant in this fight.

“I can’t see a universe where Tyson Fury can avoid of those KO punches for a 12-round period. I just can’t see it. But I would love to proven wrong, like I was proven wrong when Fury beat Wladimir Klitschko.”