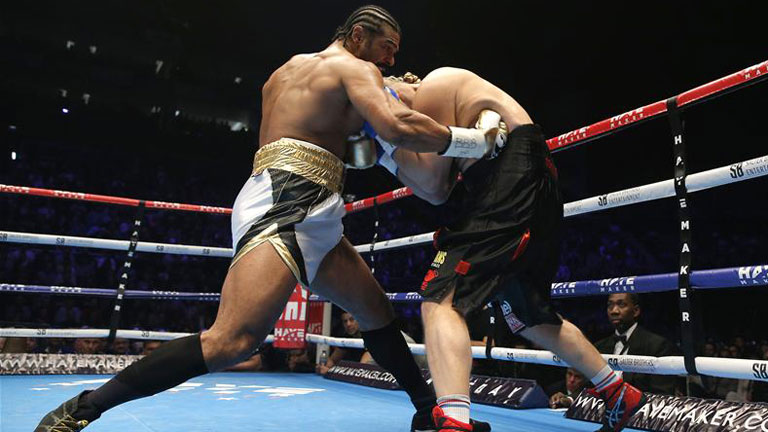 DAVID HAYE insisted he was surprised Mark De Mori crumbled so quickly at the O2 on Saturday. “I had trained for it to go into the second half of the fight. I’d heard that he’d been practising keeping a very tight guard, walking forward, putting the pressure on,” Haye said afterwards. “I’d mentally worked myself up for him to come across the ring and just put it on me, like a [Dereck] Chisora would or a John Ruiz would. But the reality of the situation is I think it’s easy to say that but when you’ve got an opponent who punches as hard as I do, to get inside and land shots, he’s going to have to be in the danger zone.”

Haye, who was returning after more than three years out of the sport with a shoulder injury, hammered the Australian to defeat inside a round. “The opportunity arose and I let my hands go. I don’t think there are too many heavyweights on the planet who can take those type of shots in quick succession,” the Briton said. “I think the speed surprises people. I can see what they’re doing and block it, so what can they do?”

But he added that even he “wasn’t expecting a quick blowout like that”. Haye continued, “I was expecting it to be a tough fight and expecting maybe to be missing shots from time to time or getting clipped with shots. I was mentally prepared for a tough fight.”

He was however satisfied with his own condition and performance. “I felt relaxed and fast,” David explained. “I feel healthy. My hands feel good. I’d love to get back in three months’ time.”

He promises there is more to come. “As much as I believed I could do it, I didn’t know. I’ve never spent three and a half years out the ring,” he said. “I just started working with Shane [McGuigan, his new trainer]. We’ve had to change a lot of stuff as we’re going along… We’ve managed to get to a point where I’m here fit, fast, healthy.”

Most gratifyingly his audience is clearly still there. “The reception I received when I walked out there was amazing,” he noted. “I genuinely wasn’t expecting the response I got, it was so positive. It makes me want to just keep giving them those same nights.

“It was a good crowd, I looked around, everybody was buzzing… It felt like the old days.”