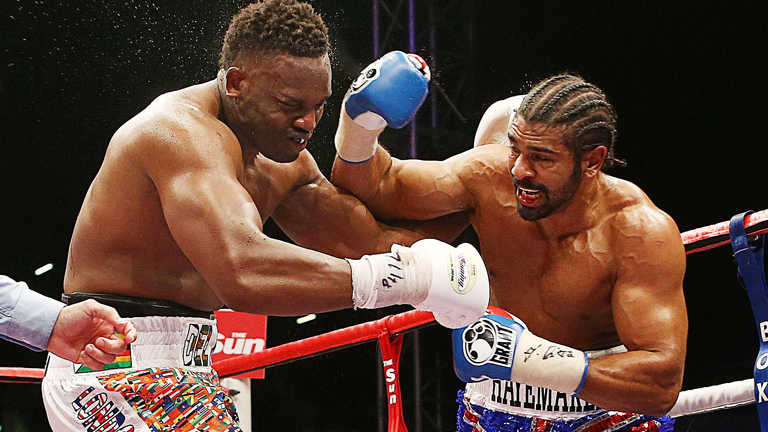 David Haye insists he'll sign off at the top of the heavyweight division, writes John Dennen

DAVID HAYE is plotting an spectacular finish to his career. While he doesn’t envisage boxing beyond 2018, he does want to sign off as the world’s leading heavyweight.

“I’ve only had three fights since [Wladimir Klitschko] and I don’t feel I’ve had the opportunity to prove how good I really am. I’d hate to be judged on that poor performance from myself,” he said.

From now on he wants to have three fights a year. “I’m not smashing myself up the way I did,” he continued. “In the past I was doing such controversial exercises that made me an amazing athlete in the ring at that time but it would take me two or three months to recover from it because I’d smash my knees, smash my back. I had so many injuries going in.

“I believe now I’m in a physical position where I will be able to box alot more regularly and that for me is really important. Shane McGuigan, one of his things is making sure that even after my fights I’m still training… I keep improving. That’s something I haven’t really done in the past. I’d normally have a fight and then take three or four months off, just to recover from the training camps I used to do.”

“I don’t believe I’ve shown my full potential at heavyweight. I did it at cruiserweight, I unified the belts. I believe I’m good enough to unify the belts as a heavyweight. I just need the opportunity to do that,” he declared. “I believe with my skillset, with my physical capabilities, given that same opportunity again to prove that I’m number one, with the experience that I have now, I will get it right and I will finish as number one, like Lennox Lewis did… He got out of there intact, mentally and physically, beat every man he ever faced, the two losses he avenged and for me he had the perfect career and he’s left a long standing legacy. I want to do something similar. I can’t quite get to do that. Lennox is to my mind is one of the all-time best fighters ever to lace a pair of gloves on. But I think I just want to fulfil my potential.