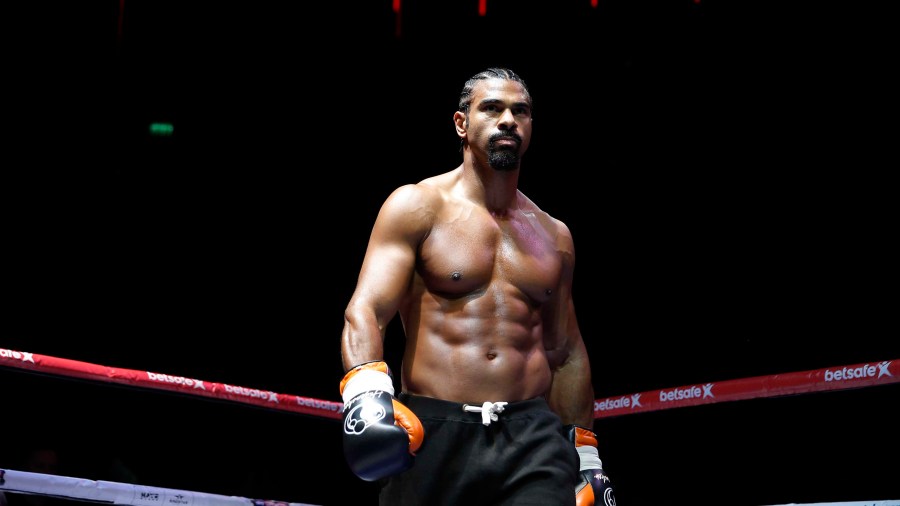 RUMOURS swirled that David Haye had been afflicted by injury in the final days in the build up to his clash with Tony Bellew at the O2 on Saturday (March 4), fuelled not least by him posting a picture on his own Instagram account of him posing with a sports doctor in Munich.

Yet at his public workout on Wednesday night in London Haye looked in magnificent condition. He sprang lightly along the ring canvas, demonstrating it seemed that there was no problem with his Achilles heel. He peeled off his shirt, to reveal a big muscular heavyweight and flung punches with gusto at Shane McGuigan’s pads. Those shots cracked into the mitts with real force and at times he tripled his right as if to demonstrate that his once reconstructed right shoulder is ready unleash some power punches.

After a fan asked when he’d win, Haye held up one, then two fingers to indicate a round two KO prediction. Throughout Haye seemed relaxed, shimmying along easily and boxing with a low guard.

Co-promoter Eddie Hearn had not been alarmed at rumours of a Haye injury. “I think he’s probably got a niggle. But he’s certainly not pulling out of the fight any time soon,” Hearn said. “I don’t think so.

“The interesting thing, David Coldwell and Tony Bellew both know David Haye quite well. Neither called me and even asked if it was true. So they know. He’s just known for his mind games.”

But Hearn maintains Haye lost his composure at the Liverpool press conference on Monday. “It was outrageous what he said,” Hearn continued. “I think there’s a lot of pressure on him. There’s much more pressure on him than what there is on Tony Bellew. No one’s expecting Bellew to win, he’s moving up in weight. I think Bellew’s got to him. I do. I’m not saying it’s going to have a bearing on the fight. I’m saying he’s definitely got under his skin.”