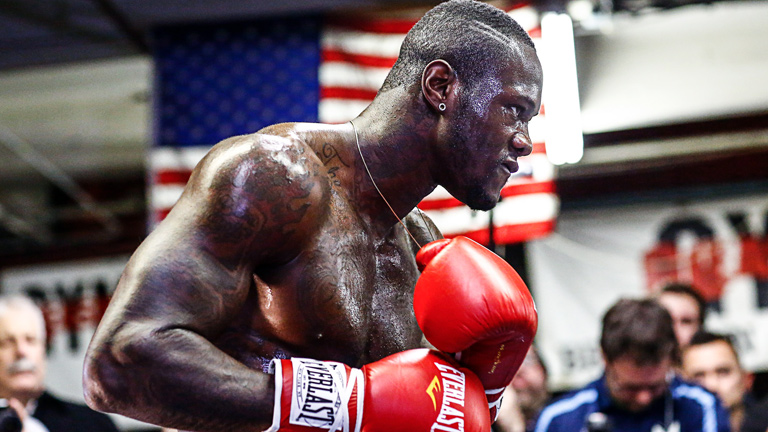 ALTHOUGH Deontay Wilder’s WBC heavyweight title fight has been called off now Alexander Povetkin has failed a drug test, David Haye is in no rush to line up a shot at Wilder. He is keeping his sights on Anthony Joshua.

“I’m a former WBC title holder, so I’ve got a great relationship with the WBC. All of the belts are on my mind. The biggest fight at the moment is in my opinion Anthony Joshua, that’s the fight that makes the most amount of sense in terms of publicity, fans,” David noted. “Deontay Wilder isn’t as big, nowhere near as Anthony Joshua. But there could be opportunities out there. Deontay Wilder’s team are very confident in his ability. He’s in a similar boat to Anthony Joshua where he won the title off Stiverne and has had a couple of learning fights against you wouldn’t call them killers, but he’s learned, you can see him progress in the fights and I think Anthony Joshua’s going to do something similar. I’m looking forward to seeing how the heavyweight landscape lays after Joshua fights and Tyson Fury fights. Come September the whole heavyweight landscape could be completely different. Imagine if Klitschko regains the title and Anthony Joshua loses to this [Dominic] Breazeale, or Alexander Povetkin and Wilder does happen later on, gets postponed to another time. The whole heavyweight mix can change in a few months. I’m just staying focused on what I’m doing. I’ve got my next two fights. I’m focused on Arnold ‘the Cobra’ and once I’ve beaten him I’m looking at Shannon Briggs and then after that the heavyweight landscape could look hopefully real attractive.”

Haye was shocked at Povetkin. “I was really surprised. I heard prior to the fight, from I believe it was Wilder’s team, that they were implementing random drug testing, which I think was fantastic. I had one the other day, I do my blood and urine tests on a regular basis with UKAD. They came to my gym the other day, unannounced, I had to give them blood and urine. It’s always been like that. It was good to hear that Wilder and Povetkin were doing a similar thing. In the past that hasn’t happened. It’s always happened for me, being a British fighter, but when you’re fighting a foreign fighter they’re not under the same stipulations as the UK. All British fighters have to adhere to it from the Boxing Board of Control. That’s just part of what you do. It’s nice to see other countries now chipping in and doing that. It was crazy to hear [that about] a fighter as accomplished as Povetkin, with one of the richest promoters,” he said. “I was shocked.

“It was a shame. I thought that was going to be a real barnstormer of a fight. For some reason because I’m hearing conflicting things about it, I wouldn’t be surprised, obviously he’s got to appeal whatever the decision is, it’s not cut and dry. In boxing strangely because this fight makes 10s of millions, literally 10s of millions, rarely does a fight of that magnitude just disappear from a technicality of something that never happened in the fight. I can only wait and see. But it’s not a great situation.

“I’d assume it gets rescheduled for another time. I’m not sure what the ban will be, six months, two months you don’t know.”

David Haye takes on Arnold ‘The Cobra’ Gjerjaj at The O2 on May 21. Watch #HayeDay exclusively live and free-to-air from 8pm on Dave, for tickets visit theo2.co.uk.