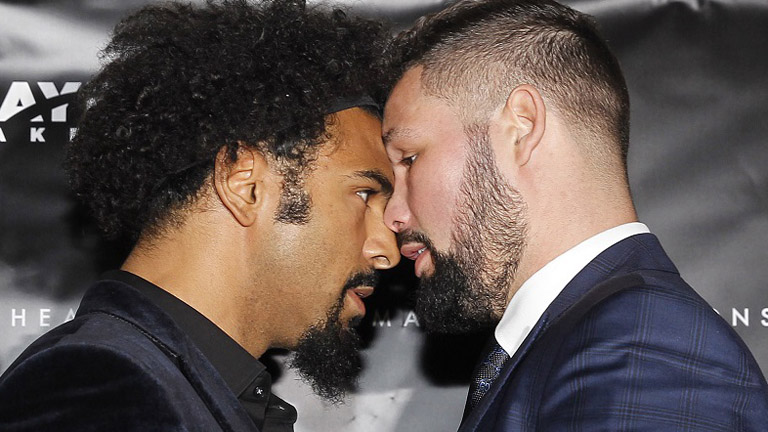 David Haye and Tony Bellew were engaged in a massively heated press conference earlier today to discuss their bitter domestic clash next year.

With no love lost between the pair, they both traded barbs at the first official press conference for their box office clash.

“It’s an interesting one, I’ve been out of this game, these big fights. This is the first big fight that the fans are getting excited about,” Haye said.

“In the time I’ve been out I’ve watched social media and YouTube and I’ve seen it’s the Eddie Hearn show, this is my chance to shut him up.

“He wants to host everything, he always jumps in front of the camera. It’s not the Eddie Hearn show, it should be about the fighters.”

After Hearn and Haye shouted over each other, Bellew got involved too and things became really heated.

“How much does it kill you that I’m promoting this show?” Hearn teased Haye.

“After this I’m going to beat Anthony Joshua and destroy your business,” Haye retorted. “You and your team are getting destroyed.”

Bellew called Haye out after winning the cruiserweight title in emphatic style against Ilunga Makabu earlier in the year, and targeted a spirited rant at the Londoner following his stoppage win over BJ Flores in October.

“I’m crap, I’m fat. We’ll see on the night who the great athlete is. Let’s stop calling his last two fights fights, they were exhibitions,” the Liverpudlian said. “I can’t put into words what they were. One was called ‘The Cobra’ he should be called ‘The Maggot’. It was only right it was on a comedy channel, he wouldn’t have employed those men to spar him.

“The last time he was in a fight was five years ago. While he’s been missing, partying, I’ve been in the gym, doing what I have to do. The difference between me and him is that I like fghting, I enjoy it. He hates fighting, but he has to do it. He knows why he has to and that’s all that’s important.

“Write me off, say what you want but I don’t care. All those demands and stipulations he put in, you can think I’ll run – and I know you think that – it’s about me and David, we’re the ones who’ll fight.

“I’m surprised he didn’t ask me to carry him here with all the demands. the ring size, who walks first etc. It’s unbelievable, he’s the biggest diva boxing has ever seen. Write me off at your peril.

“If this fight comes down to courage and heart, if the steam goes out of him after four or five rounds, he is in a world of s***.”

Haye and Bellew then engaged in a heated argument for the remainder of the conference.

“I could go out partying every night until the fight and still knock you out,” Haye said to Tony.

“You need the money and I’m the money fight,” Bellew responded. He then questioned whether Haye actually sold out his past two fights, claiming a lot of tickets were given away.

“I had a lot of options, you’re the option we’re going with to shut you up, shut Eddie up and shut Dave [Coldwell, Bellew’s trainer] up. I’ll end the fight when I want to,” Haye said. “You won a vacant title in your hometown. I won one on foreign soil, for peanuts against a guy who had beaten everyone [Jean Marc Mormeck].

“I’m not going to keep my hands up for this fight. You can’t hurt me.”

“If I lose to you – in fact I won’t even consider or fathom that silly option,” Haye said.

Bellew then continued to claim Haye has ‘blown’ the huge amount of money he’s earned over his career. Haye claimed he offered Lucas Browne $2m to fight him, but the Australian turned it down.

“Those world title fights will happen when I want them to, but for now I want  to shut this guy up,” Haye said.

From Haye’s Hollywood ambitions to Bellew’s purse sizes, the pair continued to argue until haye eventually called a close to proceedings. Unsurprisingly, the head to head turned into a scuffle and the pair had to be separated.