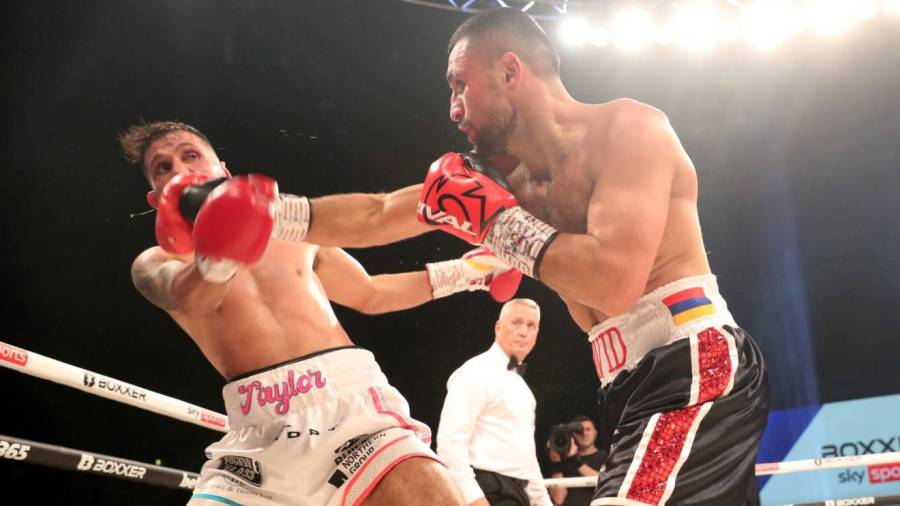 DAVID AVANESYAN retained his European welterweight title with a second round stoppage of Liam Taylor at Wembley Arena. Referee Mark Lyson stepped in at 2-18 of the session as the impressive Avanesyan – ready for another raid at world level – turned up the heat.

Taylor was ambitious early but Avanesyan’s guard was sturdy. As Taylor tried to make the most of his reach advantage, the favourite showed his quality as he scored with measured hooks and right uppercuts. Taylor’s ambition made it exciting but, even in the opening stages, it was clear he had the proverbial mountain to climb.

It wasn’t long before he lost his footing. “Ava” edged forward in the final minute of the first round and wobbled his opponent with a hefty left hook, followed with a right uppercut, another left before a right hand dropped Taylor.

The Briton fought back in the second but the gulf in class was clear. Avanesyan continued to walk Taylor down, expertly picking his shots. Taylor tried to battle back but the punches he did land had no effect at all. A left hook hurt the underdog again.

Avanesyan took his time but didn’t waste it. Closing the distance, picking each blow with precision, Avanesyan clunked Taylor to the ropes with a left hook. A right followed that sent Taylor’s head back. Another left hook clattered into Taylor and Lyson, watching closely, called off the one-side contest off. It was the perfect stoppage.

“Liam Taylor was fighting for his life in there,” said Avanesyan’s trainer, Carl Greaves. “He took a huge shot and the referee did exactly the right thing.”

“There is no stopping me,” Avanesyan said afterwards. And against opponents like Taylor, he’s probably right. But don’t expect any belt-holders at welterweight to call him out anytime soon.

Avanesyan stepped in for Chris Eubank Jnr atop the Sky Sports Boxing UK relaunch after Eubank’s proposed opponent Anatoli Muratov (a late substitute for Sven Elbir, who was forced to withdraw after contracting Covid-19) failed to pass the required British Boxing Board of Control tests.

“I’ve slept about an hour and a half since last night,” said Eubank Jnr’s promoter, Kalle Sauerland of Wasserman Boxing. “We tried to find a new opponent, a late replacement for the late replacement, right up until the last minute. It was stressful and in the end we couldn’t do it.”

It is expected that Eubank Jnr will fight on the Sky Sports card on October 16 against an opponent to be announced in the next two days.

Others who did fight included super-middleweight prospect Germaine Brown, who outpointed the lively Jamal Le Doux over 10 rounds and returning cruiserweight talent, Richard Riakporhe, who ended a two-year layoff to dominate Krzysztof Twardowski, dropping him in the eighth and final round en route to a lopsided points win.