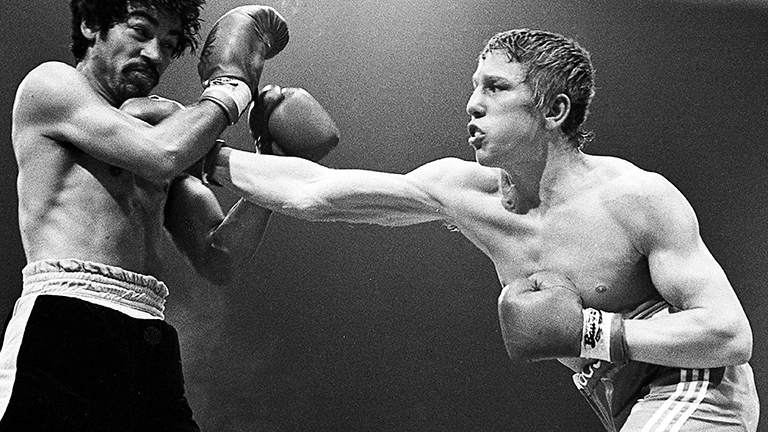 George Zeleny meets Dave 'Boy' Green, the puncher who fought Leonard, Palamino and Stracey and has been awarded an MBE

DAVE “BOY” GREEN has no trouble naming the best fighter he met in the ring.

“It’s got to be Sugar Ray Leonard. For me he’s the best I’ve ever seen. I think he was better than Muhammad Ali in technical ability. He was miles above Carlos Palomino who also beat me.”

In March 1980, Green met Leonard in Landover, Maryland. He was devastatingly knocked out in the fourth round with one of the sweetest left hooks ever thrown.

“He was the hardest puncher I met. Even my father thought I was dead.” Green can laugh about it now but it was a chilling experience as he was hit so hard he was unconscious before he reached the canvas. He was fighting a modern great but still thought he had a chance.

“I believed I could stick in there for eight or 10 rounds and then I thought I would be stronger than him. But really if I had trained for 50 years I would never have beaten him and I don’t think I would have beaten Tommy Hearns either.”

Green is 63 now, a cheerful confident and proud man. Born and brought up in the small Cambridgeshire town of Chatteris that also produced the legendary Eric “Boy” Boon, Green turned professional in 1974 and won 37 of 41 contests, winning British titles at light-welter and welterweight, plus the European titles at both weights. He also twice challenged for the WBC welterweight title.

“I was the first British fighter to win European titles at two different weights since Jack ‘Kid’ Berg. He did it in 1920, I did it in 1979, but my greatest achievement was beating John H. Stracey in 1977.”

Green stopped him in 10 rounds in a blisteringly rough fight at Wembley Arena, a final eliminator for the WBC title.

“I see John all the time now. He didn’t get on with me at first as he was a still bit sore I beat him and said I was head butting, but we are fine now.” He added with a typical chuckle, “My manager Andy Smith told me at the time Stracey would be the best fighter I had fought and he said ‘Use your head’, so I did.”

Andy Smith, father of British Boxing Board of Control secretary Robert Smith, was a huge influence on his career and life. It was Smith who dramatically announced Green’s retirement from boxing in the Royal Albert Hall ring after he lost to Reg Ford in November 1981. It was a touching moment as Green grabbed the microphone and sobbingly thanked his fans for their support.

“It wasn’t tough to retire because I respected Andy Smith so much we had agreed to make that decision together when I started out. He didn’t want to see me as an ‘opponent’ so he made the decision at the Albert Hall. He was a great man and looked after me very well. He was a one-off. I accepted his decision but if I had hung around doing nothing, I would probably have gone back into the ring. But he got me a job with his company and I was so busy I had no time to think about boxing.”

Green joined Renoak Ltd supplying cash and carry outlets and did very well. It developed into a packaging company and now has morphed into marketing. Unlike so many boxers, Green has done well since retiring.

“I’ve bought eight houses and have far too much energy to retire. You only retire when you need to retire.”

Dave went unbeaten in his first 25 fights while picking up the British and European titles. Strong and aggressive with a decent punch and unlimited determination, Green entered the Wembley ring in June 1977 to challenge WBC champion Carlos Palomino with high hopes.

The clever, smooth-punching Californian had surprisingly taken the title off Stracey a year before. Green relentlessly attacked from the first bell, giving Palomino fits and impressing BBC commentator Harry Carpenter so much that he had the Briton ahead going into the 10th round. But with his right eye suddenly swelling Green’s momentum stalled and the talented champion began to take control. The 11th saw a sudden dramatic ending as a short left hook knocked him out.

“I think that was my best performance. I did well that night but he caught up with me in the end.”

Green came back to win the European title from Henry Rhiney but surrendered it in a shock knockout loss to veteran Jorgen Hansen in Denmark. He struggled on as a light-middleweight for a few fights after losing to Leonard but the fire had dimmed.

“I had a good career, very short, 41 fights in seven years, so I’ve no regrets. I have been married for 37 years and that makes a lot of difference. I got married when I turned pro and that kept my feet on the ground.

“I’m a lucky, lucky person. Without boxing I couldn’t be in the business I’m in, it’s been brilliant to me.”

DAVE was awarded an MBE in the Queens’ Honours List. “I was very humbled,” he said. “It was a big surprise. I went to the Queen’s Garden Party, they say if you are invited there, they are looking you over, so to speak.”

Green has been honoured for his services to boxing and his charity work. When he retired in the Royal Albert Hall ring in November 1981 he became a successful businessman and he has supported several charities since. He organises golf days and appears at fetes. He is particularly supportive of charities involved with Alzheimer’s disease as his much-loved manager Andy Smith suffered from it in later life.

“I do whatever I can to raise money for charity, and I’d have thought I’ve done at least two events a month for the last 35 years.”

“A lot of world champions have not received similar recognition, and I never dreamt for a minute that I would be getting an award like this, but it’s a great honour.”