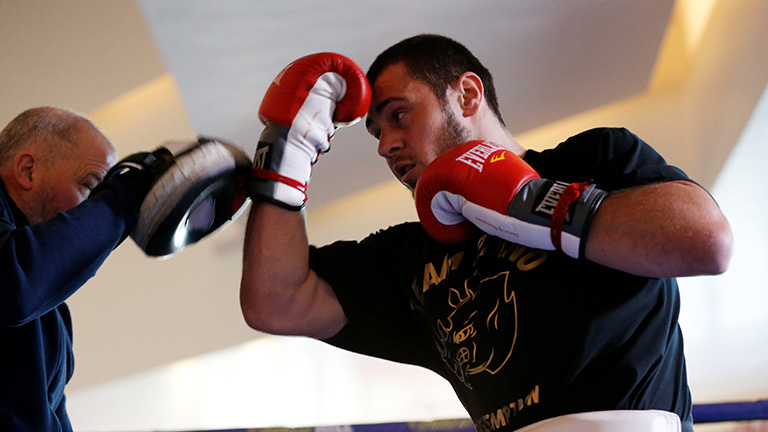 THIS Saturday’s Matchroom show at London’s O2, headlined by Dillian Whyte and Joseph Parker, was already a pay-per-view card but with only days until the first bell sounds a domestic heavyweight clash has been added. Dave Allen will face Nick Webb in an eliminator for the British heavyweight title and it’s a matchup that will delight fans of both men, despite the short notice.

Dave Allen has been in a headliner with Whyte before, as well as losing in high profile bouts against Luis Ortiz and Olympic gold medallist Tony Yoka. The Doncaster man didn’t mince his words in assessing his latest opponent, as he told Boxing News: “I don’t think he’s a bad fighter, I think he’s a nice fella but really and truly, I’m not in shape, and people can say what they want about my professionalism but it is what it is, but I do believe I beat him with my eyes shut.”

“He’s a big strong man who can punch but apart from that what can he do?” Allen asked. “I’ve seen him, he swings and misses. The only way he knows how to fight is come forward throwing bombs and that’s bad news if you’re fighting me.”

Allen certainly boasts an unshakeable determination and tenacity in the professional ring, the only two men to have stopped him, Ortiz and Yoka, are undoubtedly world class heavyweights. The “White Rhino” argues that Webb can’t hold a candle to the select few who have beaten him though, despite the Surrey man’s unbeaten 12-0 record.

If that one dimensional threat is indeed what Webb brings, it seems likely the Yorkshireman will be able to deal with it, despite patchy recent form. Years of sparring the likes of Anthony Joshua, Tyson Fury and Dillian Whyte, as well as fighting some of the world’s best heavyweights for real, leave him far more experienced than Webb. Conversely his Surrey opponent is unbeaten but has faced only three fighters with winning records.

“I think I’m very near the top of the tree domestically,” Allen argues. He’s got the backing and the physical assets to make a mark in the division. Doncaster’s “White Rhino” has overcome mental health issues and gambling addiction, as well as some tough losses. “I’ve been in over my head before and I’ve taken some stick,” he says, remembering some of the tougher moments, but with plans to take a break after this twentieth fight, it seems Allen may be re-taking control of his career’s previously unpredictable trajectory.

This fight has come at an odd moment for Allen, who had already planned to fight Manchester’s Lee “the Grenadier” Carter in a four-round farewell in Sunderland. That low-key plan now cancelled, Allen says he couldn’t turn down this fantastic opportunity, despite his plans to exit the sport. “I feel good about the fight,” he says. “You know I’ve been in a lot of fights now and I saw something on social media regarding Nick Webb and Joe Joyce. I knew that fight wasn’t happening so I just threw my hat in the ring and said, ‘You know what Ed, I’m having fight twenty and getting out of boxing for a while, I’ll take it.’ But I took it for a multitude of different reasons. I took it because I like being involved in big fights and big events, I took it for financial reasons and thirdly I think Nick Webb is a winnable fight, I do truly believe I’ll win the fight as well.”

A win would move Allen into contention for the British title, a prize he’s long had his eye on, but he’s determined to exit boxing and re-energise himself first. “I need the rest really. These last eighteen months I’ve been in with Whyte, Ortiz, 12 rounds with Thomas, then the Yoka fight was probably the hardest of the bunch. I just need a little bit of time off just to freshen myself up. But trust me I’ve got more than enough to fight Nick Webb.”

The heavyweight says he’ll be managing himself when he comes back from his planned hiatus but hopes long-time friend and ally, Mick Marsden, remains involved. Coaching and management is also becoming a priority for Allen and he has plans for his time out of the ring. He’s pencilled in plans to gain coaching qualifications and audibly swells with pride when talking about a protégé: “I’ve got one kid, Danny Murrell he’s called. I see real talent in him. The kind I wish I could have and luckily enough he wants to come train with me. I’m training him. I’m going to get my amateur badges I’m gonna’ train him and do the corner with him.”

The plans don’t end with Danny though, as Allen explained other doors seem to be opening, “A lot of professionals have come to me. They know I’m not a great fighter or a millionaire but what I am is a really honest man and what I’m hoping to do is get involved with training and managing fighters. I won’t take a penny off any of them. Boxing’s been good to me and I’m finally starting to reap the rewards of that financially. I want to put something back into boxing.”

Dave Allen’s love for the sport of boxing certainly isn’t waning, despite a desire to step out of the ring. His supreme confidence about Saturday’s bout could see him exit the sport on a high but expect to see him involved in the boxing circuit on the other side of the ropes soon. Allen’s army of fans will hope that a win on Saturday night gives way to a productive, restorative rest period and then a shot at the British title some time in 2019.