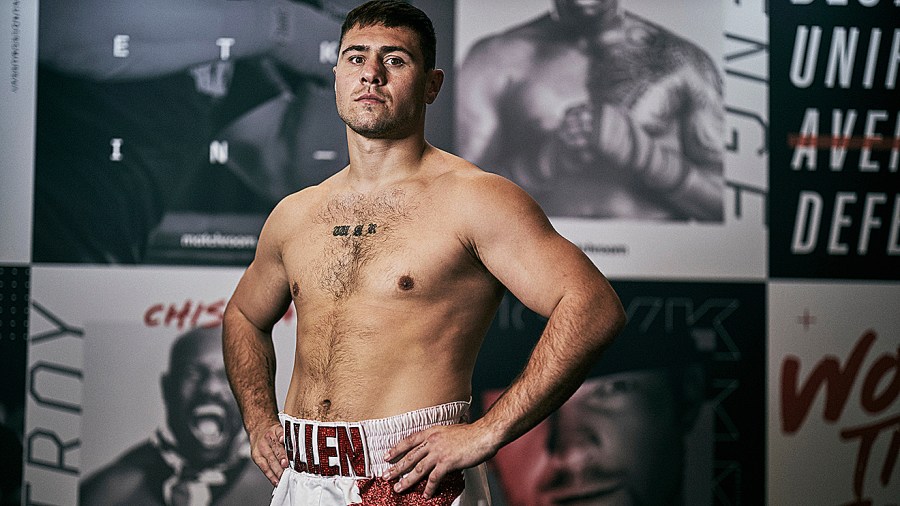 Despite announcing his retirement earlier this year, popular heavyweight Dave Allen is back and determined to have fun this time around, writes Elliot Worsell

DAYS after Dave Allen told Boxing News all about his decision to retire from professional boxing back in March, he just as quickly reneged on that decision and chose to give it another go.

The U-turn brought an end to the briefest of retirements and added the Doncaster heavyweight to the enormous list of boxers who have retired only to at some point have second thoughts.

“I think it was the end of April (Allen decided to return),” Allen said. “I was going to manage a few fighters, then eventually decided to just manage Levi Kinsiona and Stevi Levy. I spoke to Eddie (Hearn, promoter) but it was difficult (finding opportunities for them). Levi is a good fighter but he was 7-1 and Stevi was 2-0. It’s not like they’re going to be fighting on DAZN anytime soon.

“I was thinking about other ways of getting them out and I’ve been thinking about getting my promoter’s licence and doing shows. If not that, the next best way of keeping them active is for me to come back.”

“I love boxing, the sport,” he said. “There’s a lot of s**t that comes with it but, in terms of a fight, sparring, and hitting the bag and pads, I love all that stuff. The running and dieting, not so much, but I had a nutritionist on board for this one because I had a lot of weight to lose. He was also a bodybuilding champion so knew all about weight management and strength training. He did my strength training and my food. I was 21 stone at my heaviest and got in the ring at 18 stone 3. I dropped nearly three stone.”

In truth, Allen, 19-5-2 (16), was responsible for more than just whipping himself into shape ahead of his return on August 27. He was also responsible for the threat level of the opponent.

“I do the matchmaking myself now,” he explained. “I wanted a steady job back; a fight I was going to win. There’s no point coming back in a hard fight and losing. I was looking for a tough fella who was basic. I found a fella, Andre Pesce, who had a losing record, and was only 5’10, but had gone eight rounds with Andriy Rudenko in July. Purely going off that, I thought I should beat him and, if I don’t beat him, I shouldn’t be in the ring anymore.

“When I got in, straight off the bat, I could see I was too good for him and was hitting too hard for him. I got him out of there in a round and a half and after the fight he told me he had never been hit so hard in his life. It wasn’t a good performance but, given the time out, I was happy with it.”

Allen and his two proteges, Kinsiona and Levy, will next see action on October 21, with the goal once again a clear and simple one: win.

“The next opponent will be a bit better than the Italian and we will just incrementally improve the opponents as we go. I will never again take a fight I don’t believe I can win. That doesn’t mean I will be boxing journeymen for the rest of my life. It just means I will be keeping myself safe in competitive fights I believe I can win.”

One fight that appears safe enough for Allen is a future matchup with Alen Babic, the charismatic Croatian who has almost inadvertently filled the void left by Allen during his hiatus. Safe and winnable, it is a fight already being discussed by fans, and seemingly a natural one, but is still not a fight Allen is in any rush to make.

“There’ll be no Alen Babic this year, and there’ll probably be no Alen Babic in the next 12 months, to be honest, because I wouldn’t beat him,” the ‘White Rhino’ admitted. “I have to be realistic about things. That’s a fight people want to see because stylistically, watching him recently, it should be a good fight.

“I’m not saying Alen Babic and people like that need me more than I need them, but maybe they do. Those fights will always be there for me.”

Early impressions suggest that Dave Allen is returning to the sport a little older and a lot wiser. Best of all, he has rediscovered his enthusiasm.

“I think there’s more chance of me being successful this time around because I always put so much pressure on myself before,” he said. “Now I’m just enjoying it and this time matching myself, which means I’m not taking 10-round fights on two-weeks’ notice like before. This time I’m the one bringing in opponents on that kind of notice. People will say, ‘Why don’t you have 50/50 fights, Dave?’ But that’s not how professional boxing works.

“This is the first time I’ve been excited about boxing since I was boxing as an amateur 10 years ago. I feel like I’m doing it properly at last. I wasn’t planning on coming back to win anything but, you know what, if I keep doing what I’m doing, you never know what happens in 12 months’ time.”