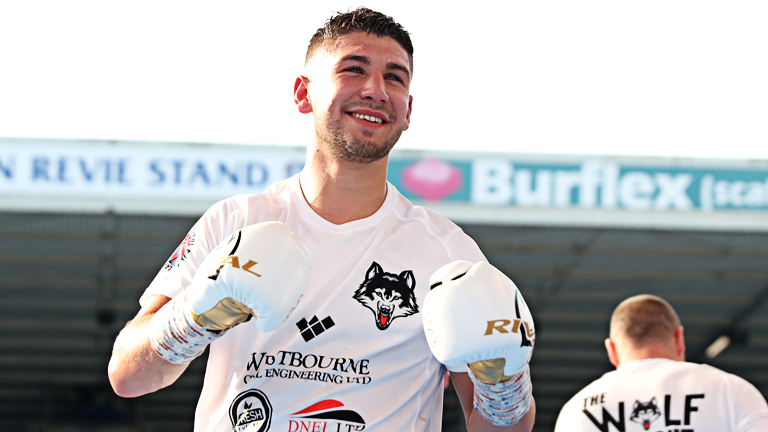 Danny Wright was undefeated in 10 fights when the adverse results of a brain scan forced him to retire two weeks ago, writes Terry Dooley

FIGHTERS are devastated when an unexpected defeat derails them. A loss can throw carefully made plans into the air and strip away confidence. Still, a reverse can be overturned in a rematch so boxers can come back from an in-ring setback. An out-of-the-ring hindrance is harder to recover from, especially if a gifted young fighter is told that they have to retire prematurely due to medical reasons. This was the scenario faced by Failsworth’s Danny “The Wolf” Wright, 10-0 (4), late last year and his retirement was confirmed a fortnight ago.

The super-lightweight prospect was pencilled in for the undercard of Josh Warrington’s IBF featherweight title defence against Carl Frampton at the Manchester Arena in December. Unfortunately, though, a pre-fight brain scan threw up an adverse result and he was removed from the show.

Robert Smith of the BBBofC told Steve Wood, Wright’s manager, that they could appeal the decision. Despite some promising initial reports from his medical advisors, Wright went before the Board again and was told that he would not be licensed, but, as he told Boxing News, he has come to terms with the decision.

“I am gutted,” he said. “We knew it was coming. When I got the news of the second result I knew I had to focus on other things and let it go. I can’t dwell on it. The second hearing that I had was a bit of a formality. The Board weren’t happy because on the scan there was a second stage of damage due to trauma, just from your brain getting rocked when you take shots.

“I had two injuries, which showed them that my brain was starting to get structural damage. Down the line that could lead to early onset of dementia, so for my own wellbeing they saw it fit to tell me to stop boxing. They knew that going in, they just had to legally give me a chance to appeal. We saw it as a chance that maybe I could get the licence back.

“The biggest thing for me was that I felt I was just wasting time until the appeal, both in my boxing career and in terms of me moving on and doing something different with my life. Fighting is over for me now. It is sad.

“The amount of support has been mad, though. You need people around you at times like this. If I hadn’t gone back to work or had that support I’d have dwelled on it. If you are sat around just thinking about stuff that is how you can get poorly or down and depressed. I’ve not felt like that. I’m devastated and upset yet I’ve not wallowed in it – I’ve just tried to get on with things.”

The 23-year-old Junior and Senior ABA titlist will continue to work within boxing; he has been handed the promise of employment by Wood and former fighter Jamie Moore. “I’ve got to move on and not just sit there in the past,” admitted Wright.

“I’ll do my coaching badges. Boxing is my area of expertise so I want to stay in it. The majority of my life has been spent boxing. My love for the sport hasn’t changed. It is just a shame that I’ll never be able to fulfil my potential in the ring. I know I could have won titles. I had a good following, my coach, Ben Lancaster, is like a second dad to me and I’ve obviously got Steve.

“Steve wants me to do stuff for VIP Boxing Equipment so I’m doing a little bit with them, promoting them and then maybe taking over the management side of stuff with Jamie. Steve has given me that opportunity and Jamie has offered me a job when his boxing academy opens. It is something I can’t turn down. After all this, Steve still wants to give me an opportunity to do something. He must see something in me.”

Wright will not be tempted should offers come his way from the bare-knuckle or unlicensed circuit. He told me that he fought to live rather than living to fight, saying: “No disrespect to the people who do it, but I just can’t see myself going into bare-knuckle or the unlicensed scene. I’ve a whole life to live. I fought because I was good at it. It wasn’t just about having a scrap, even though I loved fighting. I won’t go out getting myself beaten up for a bit of money. The whole point of boxing for me was to make a career for myself. If specialists tell me not to box and I try it somewhere else you are just going against what they’ve told you, and against the advice you’ve been given by them and the Board.”