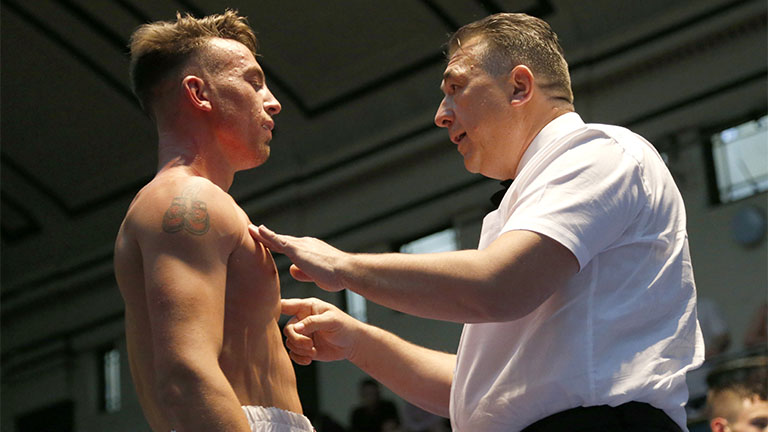 IT’S a shame that visiting Amsterdam-based Ugandan Farouk Daku was so reluctant to engage in the eight-round bill-topper at a noisy Harvey Hadden, his only real moves of note being limited to the dance moves employed on his ring walk. The result of his general reticence to involve himself in proceedings was that Newark’s popular light-heavy Chad Sugden, an 80-72 winner for the night’s referee Kevin Parker, was afforded an easier night than he might have expected, bossing proceedings without ever having to go through the gears.

There was victory too for another Sugden, two-fight novice Regis Sugden, who excelled against Langold’s Luke Middleton, dominating and leading the man from the north of the county a merry dance before the inevitable stoppage came 25 seconds from the end of the third and penultimate session.

A highly enjoyable six saw an away winner in the shape of Chatham’s Danny Shannon, who maintained the upper hand for long periods and deservedly emerged a 59-55 winner over Ilkeston’s tattooed Jamie Hughes. The only downside for Shannon was a nasty cut by the right eye sustained when heads clashed with just seconds remaining.

The latest Spanish-based Nicaraguan to grace a British ring was Jordan Rodriguez, who while ultimately bested 39-37 gave it quite a go, especially in the early part of each round in his four against Beeston’s Joe Underwood Hughes. This was despite the import picking up a cut beside the right eye in the second.

Nottingham light-heavy Olly Newham, with work now permitting, returned from a lay-off of six years almost to the day to edge out gutsy Penzance first-timer Dylan Courtney 39-38 in a more than watchable affair.

A four spoiled by too much leaning on and holding saw Clifton super-welter Ryan Amos bank a fourth paid win after outpointing Bolton’s Chris Jenkinson.

The Verdict Not even a break mid-show while the ambulance ferried Rodriguez to hospital to check out a severe headache could dampen spirits.