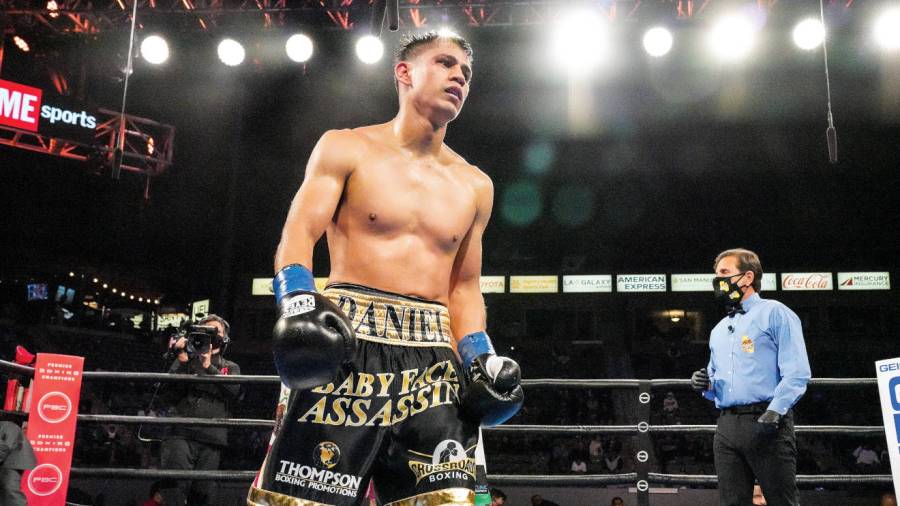 DANNY ROMAN smiles uncomfortably when he’s asked, not for the first time, if he is too nice to be a fighter. The 31-year-old is nonetheless able to counter the question with predictable humility.

“At the end of day, I’m just doing a job, Mr Nice Guy or not,” he explains from California, where he is deep in preparation for his June 4 super-bantamweight fight with the unbeaten and No.1-ranked Stephen Fulton Jnr.

“I work hard at this job and still consider myself a regular guy,” he continued. “I’m often told how well I come across in interviews and to my fans, but that doesn’t stop me going to war inside the ring.”

Roman, ranked third at 122lbs, is a man on a mission. Losing to Murodjon Akhmadaliev via split decision back in 2020 proved a bitter pill to swallow, but the “Baby Faced Assassin” is comfortable in coping with setbacks. This fight acts as an opportunity for Roman to regain his place atop the rankings and reaffirm his ability to cope with adversity.

“It was a close fight with Akhmadaliev, but I believe I won it,” Roman explained. “In my opinion, you should have to do a lot more to beat the champion, but I respect the decision of the judges. The best thing to come out of that fight was the realisation that there are certain things I need to improve on.

“When you lose, you pay attention to the mistakes you make,” he continued. “A few adjustments are needed in my game, especially at the start of the fight. I can’t be as patient as I was and take my time in the first few rounds.

“Anything can happen throughout 12 rounds, so I need to make sure I dominate from the opening bell. I can’t let the first rounds go by. You never know what the judges are thinking, so I need to take the power out of their hands and into mine.”

This self-awareness is admirable and something that he has touched on with Boxing News before.

In 2018, Roman was preparing for Doncaster’s Gavin McDonnell and explained how defeats early in his professional career enabled him to make improvements facilitating a climb towards the summit of his division. Roman would go on to beat TJ Doheny in early 2019, before running into Akhmadaliev in Miami, and the wrong side of a contested defeat to the Uzbek.

But Roman is now in the business of looking forward. He has been cast in the role of underdog against Fulton for the first time in a long time, but it’s something he is relishing.

“Of course it’s going to be a tough fight, but we all know that anything can happen in boxing,” he added. “I’m cool with being the B-side in this fight – If people don’t believe in me then I am always ready to prove them wrong. He’s the ‘unified’ champion now. And I was not so long ago too, so I know what is required to fight a guy like that. The pressure is off me now and he knows I am coming for everything. Fulton is the one with a target on his back and let’s see how he copes with that.”

Fulton is unbeaten in 20 outings and is widely regarded as one of the brightest young stars in the sport. Tightly outscoring Brandon Figueroa in November last year took him to the top of the divsion but the Philadelphian’s performance only instils confidence in Roman.

“In Fulton’s last fight, I saw that he didn’t handle pressure very well at all,” Daniel said. “He will need to improve on that because I am going to bring everything that Figueroa brought, and more,” he added. “For him, it will be important to adjust to my style. Can he do that under pressure? This fight will be like a chess match but I’m more than confident that I have the tools for the upset.

“But obviously he’s a great fighter. He’s smart, slick and he proved that by becoming unified in the division.”

Roman’s outlook on the sport is simple and refreshing: “I just want to fight the best and have fun while doing it,” he added. “Sure, I have achieved lots in the game but there is always room for more. I don’t like to waste time.

“I’ve still got plenty of years left ahead of me and I believe I can become undisputed at the weight. And if I could do that by getting revenge over MJ [Akhmadaliev], then that would be perfect.

“But I am not looking past Fulton – he is the guy standing in my way, he concluded. “And believe me, I am ready to bring the heat.”