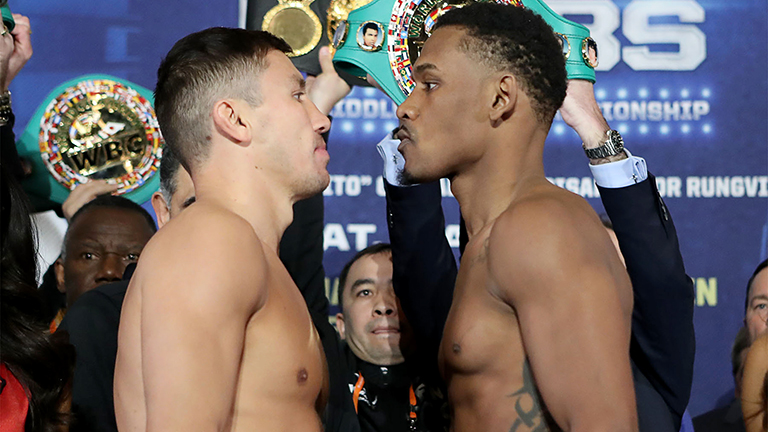 Danny Jacobs arguably gave Golovkin his toughest test to date when he challenged the Kazakh in May of 2017, seemingly matching ‘GGG’ for size and landing his shots throughout the fight, which Jacobs felt he won. After beating Maciej Sulęcki this month, the ‘Miracle Man’ became WBA mandatory for the middleweight title, edging a rematch closer.

A rising star in the 160lbs division, former IBF light-middleweight champion Charlo is undefeated in 27 fights. After his latest knockout win against Hugo Centeno Jr the Texan found himself mandatory for Golovkin’s WBC title. A showdown between Jacobs and the Texan could act as a final eliminator for both their rankings, while the two were also involved in an altercation backstage at the Barclays Center in Brooklyn, New York in March adding fuel to the potential matchup.

Saunders joins the long list of contenders waiting in line to face Golovkin, however what stands out about the Brit is his world title. If GGG is to face IBF mandatory Sergey Derevyanchenko next, Jacobs could get his world title redemption against the WBO holder, with Saunders previously stating he would welcome a fight.

A previous opponent of both Golovkin and Saunders, facing the Canadian could offer Jacobs the opportunity to better their performances and make a statement. Lemieux takes on Frenchmen Karim Achour in his return bout but will be looking for sterner tests after.

Murata offers a different avenue for Jacobs as the Japanese middleweight holds the WBA ‘regular’ title. The New Yorker held the WBA’s secondary world championships for two years after beating Jarrod Fletcher for the strap in 2014 and subsequently forced through a shot against Golovkin to unify the belts.